By MARK SABBATINI
August 3, 2004
Sign in to view read count 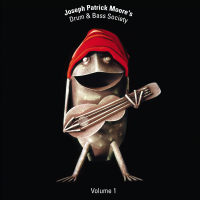 When an album opens with a quirky reinterpretation of the 1980s hit "Down Under" it's safe to assume the artist is looking to have a good time.

Joseph Patrick Moore succeeds to a degree in bringing listeners along on Drum And Bass Society, Vol. 1, even if the cast of players doesn't quite let its collective hair down enough to make this a consistent fun fest throughout. It's an all-over-the-map jam band romp where nobody's the life of the party, but almost everyone has something interesting to say if you focus on them amidst the din.

The fifteen tracks include seven originals by the bassist, plus reinterpretations of hits by groups such as Phish, The Specials, and The Fixx. It's a radical departure from Moore's 2002 multi-tracked solo album Alone Together, with the new release featuring more than twenty musicians and only a couple of songs where Moore solos—his arranging of this huge cast is the main contribution.

The most unfortunate moment is Moore's slow reggae treatment of "Down Under," which might have been a readily identifiable crowd-pleaser, but instead comes across as unimaginative and badly at odds with the album's overall beat. The vocals are played straight and the instrumentalists avoid anything notable for a radio-safe four minutes. The concept works much better on "One Thing Leads To Another" as one of the wind players takes over immediately on flute and doesn't let go throughout a peppery string of phrases. It's hardly the inspired madness of the Bad Plus, but is a plus rather than a minus to the album.

Speaking of inspired madness, some of the better moments of it occur on the hybrid world/funk/whatever collage of "Cheesefrog Funk." "Groove Messenger" delivers a decent bit of fusion in the style of Miles Davis, who Moore cites as one of his big influences. And the scope of variety can be seen on the rather flute-heavy New Agey "Rain Dance" and the almost mainstream jazz of "Herbie," a tribute to pianist Herbie Hancock.

The CD, released on Moore's Blue Canoe Records, has a $9 list price, and two songs, "Jamband Express" and "Groove Messenger (The Story of Jazztronica)," are available as free MP3 downloads from Moore's web site and online vendors such as Amazon.com .

Moore has proven a solid player in a variety of settings since appearing on the recording scene in the mid 1990s, and this album ranks well among his releases. Fans wanting to hear him in this setting will likely be satisfied and new listeners of such music will find it worthwhile to at least investigate the free previews. Those wanting to hear his playing will find Alone Together a better and also intriguing bet, since the overdubbing includes unexpected sounds such as percussion generated by tapping on his bass.