The Necks: Drive By 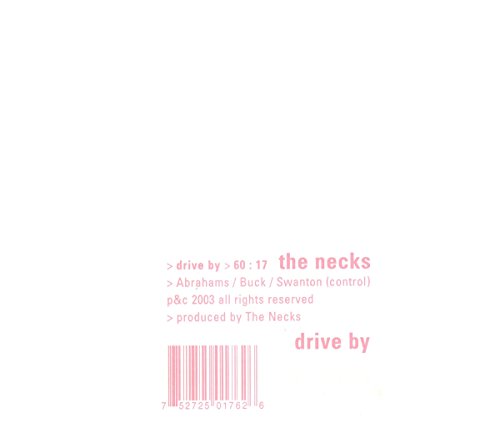 In many ancient cultures music is a tool for trance. Repeated figures, varied ever-so-slightly, can beckon you into a form of meditation where the outside world doesn't matter nearly as much as what lies within. Traditional drumming from Ghana, for example, centers itself around rituals relating to birth, spirits, and death. Westerners absorbed this idea in a very ass-backward way when modern classical composers like Steve Reich incorporated minimalism into a framework of repetition. The idea has been taken further by post-rock groups like Tortoise, who make use of studio tools to get it just right.

The Australian group known as The Necks takes advantage of both approaches: marathon cycles of riffs and beats frame intermittent piano swirls, found sound samples, and electronic effects. Drummer Tony Buck serves as the locomotive for this trio, laying down a direct and straightforward groove that persists more than an hour. The title track is the only track on Drive By, so you have to admire the concentration required. If you're not willing to be hypnotized by this music, chances are you'll find it highly annoying or turn your attention elsewhere. That's your choice, but I strongly recommend surrender.

All of these three instruments (piano/organ, bass, and drums) have the potential to be a percussion instrument, and most of the time that seems to be their primary function. (Acoustic) bassist Lloyd Swanton lays down the most deceptively simple parts of the intertwined whole, often four-note riffs syncopated with snare hits and keyboard figures. The rhythms come in units of three, four, six, and seven, often directly juxtaposed, but you wouldn't necessarily know that unless you screwed on a thinking cap.

The jazz element on Drive By mostly comes from the keys of Chris Abrahams' user-friendly organ and pedalled piano. To the extent this music has a melody, you'll find it there. But short phrases, swirls, and gentle cascades comprise just about all of it, and in the end their role is more to serve as color and accent for the pulsating whole.

Apparently this group performs this sort of heavy-duty hyponosis live, which requires an act of utter submission and the sort of intuitive understanding that transcends conscious thought. But this studio effort is most effective in its own right: a magnetic document that favors understatement over excess, introspection over extroversion. A psychedelic trip of the highest order.

Visit The Necks and ReR Megacorp on the web.