Darren Jay and the Delta Souls: Drink My Wine 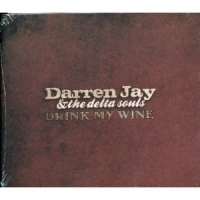 On any given weekend there are young musicians who are out to make their bones performing at local venues that will give them an opportunity to play their music. The genre of choice for the drinking crowd is usually blues-drenched covers, so that the audience can relate to and enjoy the show. Out of this scenario occasionally surfaces a talented individual who rises above the ruckus and is taken seriously. Guitarist Darren Jay is such a musician and, with his band the Delta Souls, hopes the release of Drink My Wine is his ticket out of the bars and into the national spotlight.

The record, which Jay labels Memphis-based blues, has a clear focus on the songs and sound he wanted, and the result is a diverse blend of originals with two classics thrown in for good measure. The essential Muddy Waters "Hoochie Coochie Man" is performed with a light touch which works well for the band, while "Tin Pan Alley," with superb sax playing by Art Edmaiston, is reminiscent of the Butterfield Blues Band in its prime. From the swift-paced instrumentals "Rider" and "Zilla" to the title track (a hard driving blues), Jay, drummer Hubert Crawford and bassist Laura Cupit demonstrate a maturity which comes from time on the road and an ability to deliver a well-balanced set. In a display of clever tempo changes, "Lovin' Man" begins as a playful rumba then slips into a shuffle with flawless ease. To highlight his Memphis sound, "(Baby) Don't You Lose My Number" has that Jerry Lee Lewis signature piano thumping by Tony Thomas, who also doubles on excellent organ throughout the record.

Naysayers might claim that this type of music has all been done to death, while on the other hand optimists feel that it deserves to be kept alive as American roots music. As long as there are artists like Darren Jay and the Delta Souls willing to deliver authentic goods like Drink My Wine, the latter opinion will win out every time.