By DAVE NATHAN
September 1, 2001
Sign in to view read count 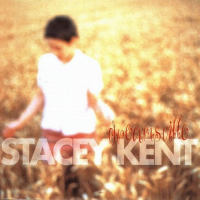 Each time after listening to a new album from Stacey Kent, one concludes that this is the best she can get, she has finally reached the ultimate rung on her artistic ladder. But then one is surprised to find that she has just reached penultimate rung, because this next release is better. Such is the case with Dreamsville, an album of unabashedly slow, romantic, winsome and sometimes melancholy ballads that tug at the heartstrings. All of them are entries, some more major than others, in the Great American Songbook. All are treated to that special Kent intimate vocal style, the slight nasal quality, the use of vibrato to make a point. Her rendition of "Violets for Your Furs" should be the topic for one class in a jazz vocal course at music schools. The timing, the phrasing, the well-placed pause for effect, stretching out the end of a phrase, all help to make her interpretation of this tune one of the finest extant. The soulful tenor solo of husband Jim Tomlinson is icing on the cake. Kent manages to sound calm and urgent at the same time. The voice is relaxed, but the message with each song is "do something!".

One important factor which make her albums so consistently good and allows each one to get better is the presence of the sidemen Kent has become used to working with. Tomlinson and his reeds, of course. But Colin Oxley's guitar has also been along for each of the albums. Listen to his backing and solo on "You're Looking at Me". The same with pianist David Newton whose understated accompaniment fits Kent like a familiar glove. Newton is also the pianist of choice of another upper echelon singer from the UK, Tina May.

Stacey Kent has reached that pinnacle all singers strive for, irrespective of their musical genre, viz., you hear a couple of measures of her distinctive voice and you know at once who the voice belongs to. without being told. Vocal album of the year? Why not? Lyrics are printed in the liner notes.

I've Got a Crush on You; When Your Lover Has Gone; Isn't It a Pity?; You Are There; Under a Blanket of Blue: Dreamsville; Polka Dots and Moonbeams; Hushabye Mountain; Little Girl Blue; You're Looking at Me; Violets for Your Furs; Thanks for the Memory