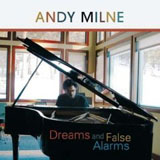 Andy Milne, solo piano? The announcement may bring mixed feelings of astonishment and surprise, but also wonder and curiosity. How will he make this fly sans Dapp Theory? Of course, Milne's talent is unequivocal—he was saxophonist Steve Coleman's pianist of choice for many years—so a solo session is an understandable and exciting new challenge for the gregarious former pupil of Canada's northern stars Oscar Peterson and Don Thompson.

Recorded during a residency at the University of British Columbia, Dreams and False Alarms finds Milne revisiting songs of his childhood. Around three originals and a prime selection of works from genius songsmiths Joni Mitchell, Neil Young, Sting, Bob Marley and Bob Dylan, the pianist takes off, unraveling newfound landscapes miles away from his usual urban, M-BASE base. A traditional, "Danny Boy," is also given a simple but quite poignant performance.

The dreamy, odd-metered arrangement of Sting's "Message In A Bottle," despite its retro-sounding three minute long production effect, really puts forth the song's inherent counterpoint, especially Milne's slight manipulation of the "Sending out an SOS..." vamp.

In fact, Milne's rhythmic facility guides and encompasses his approach to musical discourse, placing sections of repetitive rhythms and chordal textures alongside contrasting, slippery accents and over-the-bar-lines ideas. In general, his music shifts gears rather quickly, giving it a sort of swift angularity, thought tempered here by a "discipline in keeping it simple," as acknowledged in the liner notes.

Both this disc and Scenarios (ObliqSound, 2007) suggest Milne is in a period of transition. And, while we anxiously wait for his next projects, one rests assured in the searching pianist's ability to reach inspiring new plateaus.

Amelia; Geewa; Message In A Bottle; I Shot The Sheriff; After The Goldrush; The Times They Are A-Changin