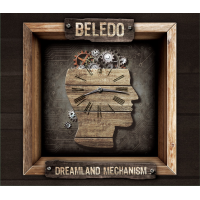 Hailing from Montevideo, Uruguay but now resident in New York City, prodigiously talented multi-instrumentalist Beledo signed to MoonJune Records in 2013. The result of this signing is a stunningly good album sporting some of jazz fusion's most talented exponents including the redoubtable British drummer Gary Husband and in-demand NYC bassist Lincoln Goines. Beledo won his spurs playing guitar, his main instrument, in Uruguay rock and blues supergroup Dias de Blues and other bands including his own outfit The Avengers and he's also recorded a clutch of albums under his own name over the past few years.

The opener, "Mechanism," a trio outing featuring Gary Husband and Lincoln Goines also benefits, in addition to his excellent guitar work, from Beledo's superb violin playing which evokes the timeless jazz rock of Don "Sugarcane" Harris's contribution to Frank Zappa's Hot Rats. Although the violin is not much heard again on this album it does beg the question as to why Beledo doesn't play this instrument more since it provides a completely different dimension to the track. In the opinion of this reviewer he really should.

"Bye Bye Blues" is a straight ahead fusion number again featuring the Beledo/Goines/Husband trio with Beledo evoking the spirit and axe-bending dexterity of Allan Holdsworth without managing to sound derivative. "Marilyn's Escapade," replete with more acoustic instrumentation, is necessarily a lighter affair and here the revelation is Beledo's truly accomplished solos on piano and accordion. "Lucila" is yet another step change, a very Iberian composition, Beledo here plays Spanish guitar and demonstrates his versatility once more with a Jaco-esque fretless bass guitar solo followed by an equally deft electric guitar solo.

"Sudden Voyage" is a gloriously meaty guitar outing recalling some of Harvey Mandel's fluid, visceral runs, whereas "Big Brother Calling" and "Mercury In Retrograde" are pithy no-nonsense workouts, and in the context of a power trio, stylistically nearer to Holdsworth's supersonic tendencies. Taking a break from the frenetics of the three preceding tracks, the languid "Silent Assessment" features Beledo on electric archtop guitar which imparts an air of mellifluousness and allows space to take a more measured approach with distinct leanings towards a Pat Metheny sound.

"Budjanaji" a punning title, respectfully name-checking guitarist Dewa Budjana's who guests on this number, is again a more relaxed affair, augmented by plentiful and exotic percussion. Beledo takes the first guitar solo and Budjani the second and wordless vocals from Beledo add to the wistful nature of the piece. The final track, "Front Porch Pine" reverts back to a trio format of Beledo, Steele and Lev, with the guitarist squeezing every last drop of excitement out of his instrument courtesy of rapidly ascending and descending runs, the whole piece bookended by an intelligent complex melody.

Beledo is a super-talented musician and his compositions throughout the album are excellent showing that he is more than capable of providing contrasting light and shade. If he is not as widely-known as he ought to be, this album will surely assist in changing this state of affairs. For lovers of fusion this album will pay huge dividends on repeated plays.