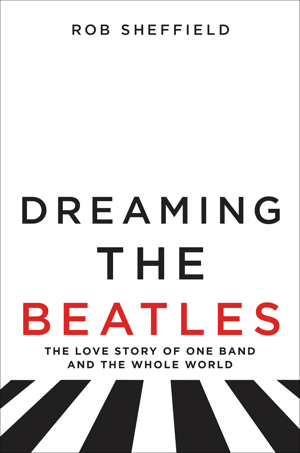 Rob Sheffield is so enamored of his subject on Dreaming The Beatles, any fan who reads it may be inspired to write a book on the band too. And that's because of the largely infectious, ebullient tone he maintains over the approximately three-hundred sixty pages. But Sheffield may actually be too effervescent for his own good in sharing this collection of his ruminations on the iconic group. His thoughts and words come out in such a rush, continuously and from varying angles, that he all too often reminds of the individual so excited about a topic of discussion he/she makes excessive light of it in order to not give the impression he/she takes it too seriously.

Truth be told, we do not need another scholarly treatise on the Beatles. Yet writing The Love Story of One Band And The Whole World, Rob Sheffield may go too far in the other direction, regularly shrouding ideas worth discussing in a torrent of opinions and factoids that beg the question of what's preferable: a depth of knowledge or a breadth of knowledge. For instance, his savvy perceptions of George Martin are all worth reading, especially his observation that the Beatles producer, even as he encouraged the group to compose their own material, declined to cut himself in on song publishing rights—a common practice in the pop world at the time. There the writer captures the late studio collaborator's generosity and dignity in the proverbial nutshell.

In the overflow of information here, there's no question Rob Sheffield has a command of both. Time and time again as the book progresses, though, there's the sense he's trying too hard to impress with his grasp of trivia, at least based on his erroneous contention the Beatles never played "Act Naturally;" it's an assertion that comes into question with a cursory web search. Still, there's no reason at all to doubt the legitimacy of his passion arising from his devotion to the Beatles and their music, except insofar as his lighthearted tone, as previously referenced, too often seems strained.

For instance, his use of various song lyrics as illustrations of his point(s) is a cute conceit early on, but quickly becomes annoying, cluttering his prose and obscuring more salient points of potential discussion. Sheffield might otherwise opens up a world of dialogue, albeit a somewhat high-minded one, based on statements such as the following: "The Beatles invented the self-contained rock and roll band playing their own instruments and writing their own hits." Notwithstanding the approach of Buddy Holly & the Crickets (upon which nomenclature the Beatles derived their name) or the early Beach Boys, this approach of the four lads from Liverpool was the crux of the paradigm shift they came to represent as was the confidence they developed in proportion to their burgeoning success, an equally profound point to which this author eventually speaks..

Years of pondering the work of the Fab Four have given this 'Rolling Stone Magazine' contributor some great insight into their collective and individual psyches and there are more than a few such provocative thoughts peppering Dreaming the Beatles: "They preferred to sing their hearts rather than speak their minds" and, in reference to the tale of (Prudence Farrow's) sequestering herself while on retreat in Rishikesh, India: "John just needed to imagine her madness to sing about his own." Would that he had elaborated on those ideas rather than embark upon the tangent devoted to cover versions of the group's songs.

Devout admirers of the Beatles will no doubt find that whatever epiphanies they experience from reading this book will add to their appreciation of the songs the music and the recordings of Lennon, McCartney, Harrison and Starr. In strictest possible sense, Rob Sheffield's admirable achievement with Dreaming the Beatles is the highest compliment to be paid to any writer devoted to a musical related subject, that is, to prompt his audience to listen again, with the ears now oriented from a different perspective.