Jonathan Ng: Dreaming on My Feet

By MARTIN MCFIE
August 4, 2019
Sign in to view read count 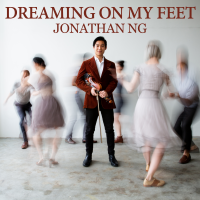 Jonathan Ng arrived at his album Dreaming on my Feet by following his dual passions for dancing and music. Classically trained as a concert violinist, he was later captivated by the freedom of jazz. Where would a classical violinist go to look for the best jazz dance music? The answer is, to romantic Paris where the violin of Stephane Grappelli once played with guitarist Django Reinhardt in the Hot Club of France and often included the sweet strains of the accordion. As a dancer, Ng wanted the beats to be precise, so he sometimes added drums to brush along beside the rhythmic guide of the hi-hat cymbals.

So Ng created a Gypsy Jazz dance band with all the romance of Paris, and now tours extensively around America and Japan.

Many of the tracks on this album have familiar titles from a time when dancing was the only social pastime. Ng lined up well-known favorite tunes for his Gypsy jazz treatment so that dancers would already know where the music was going. "Jordu" is a jazz standard written by Duke Jordan, eminently suited to the violin sound. It is followed by "Dreaming on my Feet" which is a beautiful title for this track and the album, encapsulating the nostalgia, romance, and aspirations of Ng's music. Fats Waller wrote "Honeysuckle Rose" in the Broadway era, and it was in a review as a soft-shoe shuffle. "You'd be so nice to come home to" was written by Cole Porter in 1943 and featured in the film Something to Shout About. "Stars fell on Alabama" is a Frank Perkins composition. Here, Ng dispensed with the drums and instead used the rhythm guitar played in the Gypsy style. "After you've Gone" is a Turner Layton song from 1918. Ng's voice is unsteady in the opening bars of this track but quickly settles. Dreaming on my feet is an album for swing dancers and those who want to sit out and hear romantic Gypsy jazz swing music written by some of the great composers of Broadway and the dance band era.

Jordu; Dreaming on My Feet; Honeysuckle Rose; Stars Fell on Alabama; You'd Be So Nice to Come Home To; After You've Gone.