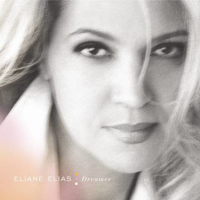 Brazilian-born pianist and singer Eliane Elias has now spent half her life in Brazil and half in the United States. For this release, her second Bluebird Jazz recording, Elias selected the repertoire carefully, choosing meaningful songs that would work in a bossa nova setting, by both American and Brazilian composers, most of the latter of which already had lyrics in English. (Two, "Movin' Me On and "Time Alone, are original songs, her first in English.) In addition to the predominantly English lyrics, two other characteristics set this album apart from her prior efforts: she is backed throughout by the lush sounds of an orchestra, and here Elias the singer is front and center, accompanied by Elias the exquisite pianist.

The result is a dreamy, elegant and sensual 53 minutes of romantic jazz. Elias' low, breathy, intimate, nearly vibrato-less instrument both shapes and fits the mood perfectly, while Rob Mathes' lush orchestral arrangements create a lacy fabric that is tasteful and non-intrusive. Tony Hatch's "Call Me, and Elias' first original, both feature the nonpareil saxophone of Michael Brecker. Two selections pay tribute to the renowned Antonio Carlos Jobim: "Photograph ("Fotografia ) and the title piece ("Vivo Sonhando ), with lyrics by Ray Gilbert and Gene Lees, respectively. Other Brazilian composers include Paulo and Marcos Valle ("So Nice, or "Samba de Verao ) and Dorival Caymmi ("Doralice ); on the latter, Elias pays tribute to Stan Getz's performance on the legendary Getz/ Gilberto album by transcribing his sax solo for the piano on her first chorus. The CD is nicely paced; "Baubles, Bangles and Beads, ' Tangerine, and "Doralice are the lighter, more up-tempo selections that keep things moving. The album closes with its only instrumental number, Bacharach and David's "A House Is Not a Home, where Eliane's pure, crystalline tone and velvety touch have their moment to shine.

Call Me*; Baubles, Bangles and Beads; Photograph (Fotografia); Movin' Me On*+; So Nice (Samba de Verao); That's All; Tangerine; Dreamer (Vivo Sonhando); Time Alone; Doralice; A House Is Not a Home