By DAN MCCLENAGHAN
January 17, 2010
Sign in to view read count 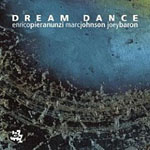 Italian pianist Enrico Pieranunzi's music is often said to incorporate European classicism, suggesting seriousness and, perhaps, a staid erudition to those who haven't heard him.

Pieranunzi has fronted a trio with bassist Marc Johnson and drummer Joey Baron since 1984. While not a working band like Keith Jarrett's enduring Standards Trio, Pieranunzi's recordings and tours over the past quarter century have engendered a joyously telepathic interplay, running with the Bill Evans piano trio approach of three way equality.

Pieranunzi's classicism is in full display throughout the disc, but that's not to suggest a cerebral or sedate affair. "The End of Diversions," the opening cut on this set of all Pieranunzi originals, blazes ahead with a burning forward momentum, with an angular sound resembling Thelonious Monk. It's a semi-choreographed wrestling match between Pieranunzi, Johnson and Baron, taking the three way interplay game to an extreme.

"No-Nonsense" trundles along in a headlong way, with rock music energy, while "As Never Before" introduces ballad form to the set. Wistful and inward, the trio treats the slower tempo with a sense of delicacy and beauty that contrast nicely with the disc's faster, more fiery tunes.

"Castle of Solitude" drifts along on a pretty melody and Johnson's assertive bass lines, with Pieranunzi's deft lyricism on full display. "Peu de Chose" has a gregarious, sunny side of the street feeling, while "Nippono Ya-Oke" bask in a lush exoticism.

Pieranunzi and his "American Trio," don't seem to a have a huge profile on the west side of the Atlantic, but with Ballads (Cam Jazz, 2006), Live in Japan (Cam Jazz, 2007) and now Dream Dance they prove they are one of the very top tier piano trios working today.