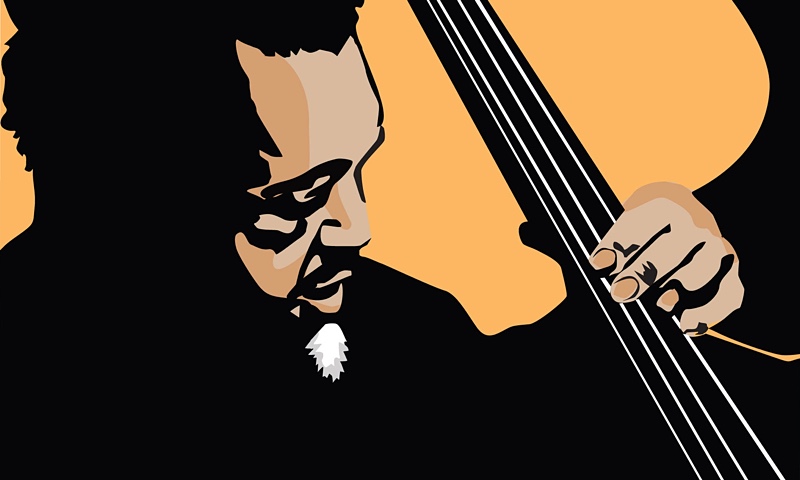 By KEITH HENRY BROWN
March 12, 2015
Sign in to view read count
A twist on the old cliché, "Those who can't play—draw,"—that's my personal point of view. I've been a jazz nut since as long as I can remember, and as soon as I could push a pencil—even though I could barely bang out a simple tune on a piano—I was sketching some of my favorite players, Charles Mingus, Miles Davis, Duke Ellington.

In 2000, after beginning a career as a graphic designer, I was awarded the position of design director at Jazz At Lincoln Center, hired by Wynton Marsalis himself. After a year or two working there I could see the jazz community was relatively small, so I got to know various musicians who came through its doors as performers or supporters. I worked with a good friend of mine there who eventually became manager of the superb jazz bassist Christian McBride.

One Summer, Christian was scheduled to perform at the famous New York spot Village Vanguard and Lorraine Gordon, the owner of the club, wanted Christian to assemble some musicians because she preferred McBride's acoustic music to the electronic sounds he was currently exploring. 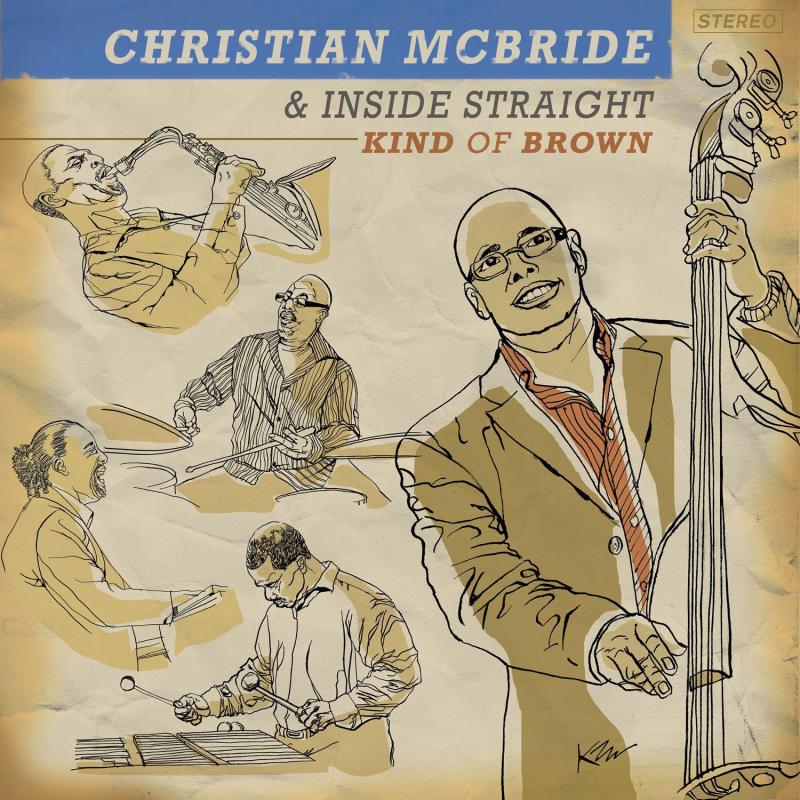 So Christian put together an awesome band—saxophonist Steve Wilson, vibraphonist Warren Wolf and drummer Carl Allen—who were later dubbed Inside Straight. Christian's label Mack Avenue Records wanted to release an album quickly, based on the success and acclaim the new music was getting, but they had no current photos so someone had the bright idea of having an artist draw the band. And so my buddy from JALC invited me to sketch the boys rehearsing. Those drawings, inspired by the great jazz cover illustrator David Stone Martin, who designed and drew dozens of wonderful jazz covers in the 30's, 40's and 50's, became the basis for the album art of my first disc & LP cover, Kind Of Brown. Christian liked the result, so I also became the illustrator of two more subsequent releases—The Good Feeling and People Music.

Working with Christian is a real pleasure. It usually starts with a phone call— "Brother Brown, guess we're gonna be working together again..." and he'll give me an idea of what he's thinking about for the cover, and I'll send him sketches, as well as to Mack Avenue's creative director Randall Kennedy. While Christian and band are touring, I'll receive emails with changes or approvals.

Our last collaboration, People, was our first truly conceptual collaboration. The first two covers were portraits of the musicians in performance, while People was a personal statement. It came out of Christian's feeling about the general makeup of the audience he often saw when he looked out from the stage every night. He explained that over the years he's often seen the same sort of fans over and over again in clubs and concert halls. He believed that jazz has a stigma—it's old, it's anti- melodic, and it's boring. But anyone who's been to a Christian McBride show knows his music is the opposite of those things. It's a real funky good time (McBride's been known to throw in a James Brown jam or two in his shows), as well as being musically adventurous—but in a way that most folks can get into it.

Christian's idea for the cover was to portray a typical line-up of fans at the front entrance of a jazz club featuring folks of all different races, ages and backgrounds happily awaiting a typically groovy Inside Straight gig. For this job, because we were on a very tight deadline, I sketched very quickly. I drew each character separately, scanned them into the computer, and created different layers for each in Photoshop—along with the background, so each individual would be separate as well every element, so I could move them around in the illustration so, for example, I could remove or add a figure if Christian or Randall wanted me to, without having to redraw or erase over and over again.

It ended up being a good game plan, as there were many opinions on the specifics of each character, down to how they would stand and what they were wearing, even the breed of the dog sitting on the corner! 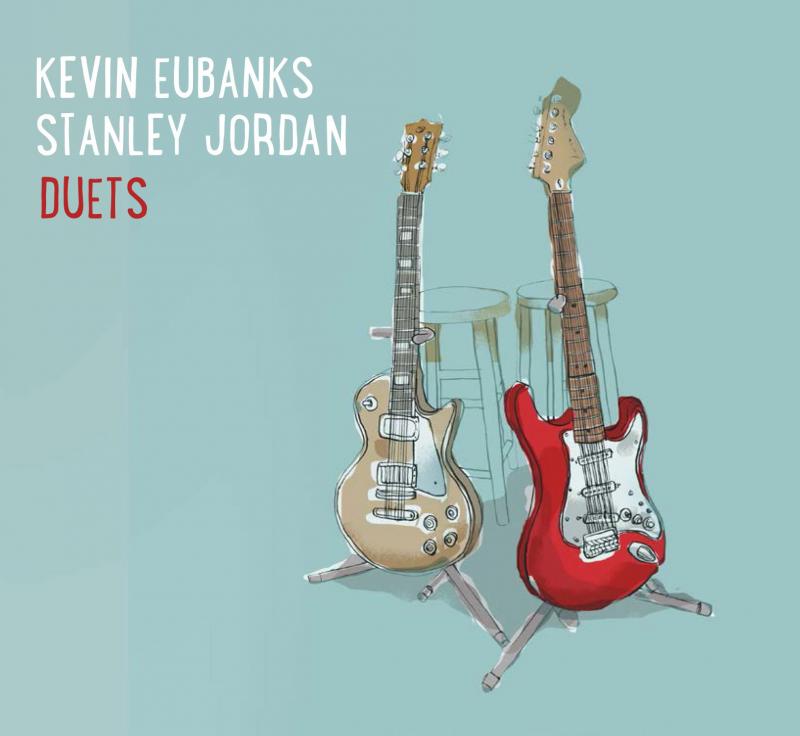 This eventually led my latest assignment: to illustrate the cover art for Duets, A beautifully recorded collaboration between the brilliant guitarists Kevin Eubanks and Stanley Jordan. Duets presented a new challenge: how to suggest the lovely music on disc without showing the artists themselves, who declined to be depicted visually anywhere on the package.

After a productive phone call with Randall, I set about making sketches and came up with the idea of two lone guitars on their stands. The idea suggested also the sound of the recording, which is clean and sparse, and also that it's a musician's record and about the straight-ahead beauty of the playing.

The second challenge of the record was that both Eubanks and Jordan were unavailable at the time we were working on the package, so my question as to what type of guitars were used by the musicians would to go unanswered, at least by them. I spent some time on the internet researching this, settling on a few models (For the record, a Vigier Apege for Stanley and a Gibson Les Paul for Kevin). Then, I called several local record shops to ask if they carried these rare vintage instruments.

Soon, under the watchful gaze of the gracious Karl at Main Drag Music in Williamsburg, Brooklyn, I found myself in the back room photographing some gorgeous and very expensive guitars in an arrangement based on my layouts for the cover images. Both artists eventually approved the results through email.

I've been incredibly fortunate in recent years to have the opportunity to merge two of my passions—music and visual art. And one thing I've learned from collaborating with excellent artists like Christian McBride, Toshiko Akiyoshi, as well as hot young up and comers like Ulysses Owens, Jr. and Matthew Rybicki —there's no end to what can be done visually in the dynamic world of jazz.

Click the "View related photos" button next to my byline to view some of my recent work. 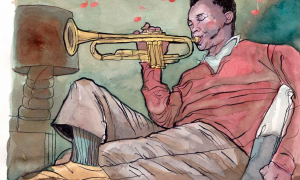