By JOHN KELMAN
February 9, 2005
Sign in to view read count 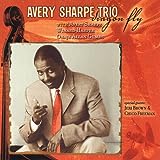 Best-known for his longstanding relationship with pianist McCoy Tyner, bassist Avery Sharpe has released three albums to date that feature him mixing it up with a sounds ranging from gospel/groove to straight-ahead. But while he has made his name in Tyner's piano trio format, Dragon Fly is the first time Sharpe has explored that configuration for a project of his own.

To some extent Sharpe is all about contrast. "Oh No!'? starts with a complex head carried in unison by Sharpe and his trio, featuring pianist Onaje Allan Gumbs and drummer Winard Harper, before shifting into a swing at a breakneck speed that would challenge any soloist; but Gumbs rises to the occasion, Harper shadowing his every move. "Swingfield,'? on the other hand, is a lightly funky tune with Sharpe stating the theme on electric bass. The title track alternates between an intense and foreboding passage with Sharpe's searing arco and a lighter theme where Sharpe switches to pizzicato and plays counterpoint with Gumbs.

There is little doubt that this is a bassist's album. Much like Marcus Miller, Sharpe is for the most part the primary thematic voice and unquestionably dominant, while others get solo space. Like Miller, however, Sharpe sometimes runs the risk of monotony; while there is nothing inherently wrong with the bass as a lead instrument, there are times when a little more democracy in sharing the melodic load would give the album a broader reach. And there are times when Sharpe's attempts at rapid-fire electric bass lines seem to barely make it, as if he is testing the very boundaries of his ability. Not that there's anything wrong with that, but where a bassist like Miller makes such endeavours feel effortless, with Sharpe you can feel him working for it, perhaps too much so.

Still, there is plenty to recommend on Dragon Fly. Guest vocalist Jeri Brown delivers a restrained reading of "My Favourite Things,'? drawing her phrases out over Sharpe's metrically altered and reharmonized backdrop; even her scat solo over the more intensely swinging middle section is a beautiful example of control—the rhythm section going for it in an unbridled fashion, Brown remaining authoritative yet subtle. On saxophonist Chico Freeman's "Evolution,'? Sharpe finally takes more of a backseat rhythm section role, giving the majority of the space to guest Freeman.

As fine a bassist as Sharpe is, the album has a bit too much of the feeling that he is out to prove something. Other bassist-led bands, specifically Dave Holland's longstanding quintet and big band, comfortably balance the rhythm section responsibilities of the instrument with the inarguable virtuosity of the leader; but with Dragon Fly Sharpe is too overbearing. The best groups may have an acknowledged leader but are, at the end of the day, democratic environments where no one instrument dominates. With Dragon Fly Sharpe proves his formidable ability, but in a context that ultimately places him too consistently front and centre.

Visit Avery Sharpe on the web.