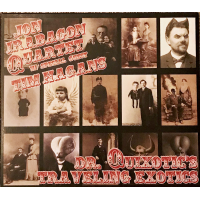 Tenor saxophonist Jon Irabagon is best known for his long tenure with Mostly Other People Do the Killing (MOPDtK), beginning with This Is Our Moosic (Hot Cup Records, 2008) and through the majority of that group's releases up to 2017's Loafer's Hollow. But along the way to Dr. Quixotic's Traveling Exotics, he has accumulated an eclectic resume. His Perpetual Motion (A Celebration of Moondog) (Jazz Village, 2014), with French composer and multi-reedist Sylvain Rifflet, was a moving and exuberant tribute to Louis Thomas Hardin. Irabagon's multiple projects with Barry Altschul demonstrate his affinity for free jazz, minimalism and polyrhythmic acrobatics. He has been a member of the Mary Halvorson Octet, the Dave Douglas Quintet, Rudy Royston's Orion Trio and a successful leader of his own groups. The quintet featured here is principally the same as that which appeared on Irabagon's Behind The Sky (Irabbagast Records, 2015).

Dr. Quixotic's Traveling Exotics features Irabagon's quartet and guest trumpeter, Tim Hagans. Hagans replaces Tom Harrell from the previously mentioned album. Hagans is the long-time musical director of the Swedish Norbotten Big Band and came up through the ranks with Stan Kenton and Woody Herman. Despite that classic big band background, the trumpeter has become known for his inventiveness and modern approach even in those long-established organizations. Bassist Yasushi Nakamura was awarded a full scholarship to Juilliard and has worked with Wynton Marsalis, Wycliffe Gordon, Toshiko Akiyoshi, Hank Jones, Dave Douglas and many other notable artists. He has toured globally and his own compositions have been featured in film and ballet settings. Drummer Rudy Royston has earned the admiration of the jazz community over the past twenty-plus years, working with a host of upper echelon artists such as Bill Frisell, JD Allen and Ben Allison. He too has worked regularly with Dave Douglas, playing on the trumpeter's Greenleaf releases of Be Still (2012), Time Travel (2013), and Brazen Heart (2015). Some of Royston's best work can be heard on Rudresh Mahanthappa's Bird Calls (ACT, 2015). Royston, Irabagon and Nakamura made up the drummer's trio on Rise Of Orion (Greenleaf Music, 2016). Pianist Luis Perdomo is a native of Caracas, Venezuela. He has appeared on over two hundred records, and has also worked with Douglas, David Sanchez, David Gilmore and a long list of well-known artists. Perdomo was a long-time member of Ravi Coltrane's Quartet and a founding member of the Miguel Zenon Quartet.

Based on physical appearances, one could easily think that Dr. Quixotic's Traveling Exotics is a compliment to Irabagon's MOPDtK days; the strange and slightly creepy artwork is reminiscent of "Miss Peregrine's Home for Peculiar Children" and the titles and notes are witty creations in their own right. But the music quickly dispels any notion that this album is anything less than Irabagon's own vision. The six Irabagon originals—only one running under double-digit length—are all deeply involved compositions that play out as self-contained suites. "The Demon Barber of Fleet Week," begins with Irabagon's slowly building solo, then opens to the group. They fade away quickly as Nakamura steps to the front and the pattern is repeated through Perdomo and Royston. By the time Irabagon resumes the lead, we have gone through an entire self-contained mini-symphony. Hagans joins in on the more intense "Emotional Physics/The Things," "You Own Your Own" and "The Bo'Ness Monster," and here too there is a back-and-forth that at times drifts toward balladry, hard bop, free improvisation, a trace of New Orleans, and back again. "Pretty Like North Dakota" is not a facetious title and provides a welcome respite in its straightforward beauty and a perfect set up for the powerful rhythmic groove on the closing "Taipei Personality."

lrabagon's outstanding and varied playing has been well recognized; it is controlled, and can be probing or sizzling to equal effect. With Dr. Quixotic's Traveling Exotics he reaches a new and sophisticated level of composing. It is fun, but it is serious, thoughtful fun. His writing and arranging reflect the divergent aspects of Irabagon's ideas and he has the presence of mind to surround himself with unusually visionary group members. This album may be looked back on as a benchmark in his resume.

The Demon Barber of Fleet Week; Emotional Physics/The Things; You Own Your Own; The Bo’Ness Monster; Pretty Like North Dakota; Taipei Personality.