Dmitry Baevsky: Down With It

By DAVID A. ORTHMANN
December 7, 2010
Sign in to view read count 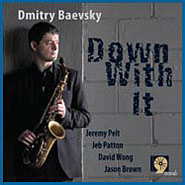 As jazz moves in many different directions and breaks free from the all too familiar and readily categorized sounds of its first century, how does an artist make bebop sound like something other than an exercise in nostalgia or an academic pursuit? In the hands of the thirty-four year-old alto saxophonist Dmitry Baevsky, bop is still a vein worth mining. Down With It, Baevsky's third date as a leader, contains an inspired selection of material, smart execution, and some marvelously telling details.

Each member of the quartet, with trumpeter Jeremy Pelt joining them on four of the nine tracks, plays his role to perfection. In nailing a ludicrously fast tempo on the head of "Down With It," bassist David Wong and drummer Jason Brown show no signs of strain. Baevsky's keening alto states Bud Powell's edgy, crackling melody with crisp economy. Pianist Jeb Patton dogs Baevsky every step of the way and, despite the band's wicked pace, sometimes his chords jump out and take on a life of their own. Brown's brief, flickering snare fills add just a little more thrust to the proceedings. All in all, the band's performance serves as a reminder that, at its best, bebop is truly a joyous, playful music.

Another highlight of a record which contains no mediocre tracks is Gigi Gryce's "Shabozz." The head makes a smooth transition from a sixteen bar Latin intro to medium tempo swing. Wong's walking bass line gives the band the right amount of lift. Goosed by Brown's snare drum accents—some of them more felt than heard—Pelt's solo is short on pyrotechnics and long on melodic invention. Every note sounds like it's played with Wong and Brown in mind. Baevsky takes a more aggressive stance. He balances long, twisting passages and shorter thoughts which adhere to the rhythm section's firm foundation.

Sonny Rollins' "Decision" contains some of Baevsky's finest improvising of the set. Once again, there's a palpable connection between his alto and the rhythm section—one really can't be separated from the other. The tune is taken at what Kenny Washington - Vocals once referred to as an "adult tempo," a pace somewhere between slow and medium which requires patience seldom found in the young. Though Baevsky eventually builds to a satisfying climax, what stays in mind is the way—particularly during the first chorus—he delivers a short phrase, briefly pauses to let it take effect, and then finds another one.

To their credit, Baevsky and his cohorts don't invite facile comparisons to giants from a bygone era. Down With It is an excellent recording that stands on its own merits.

Down With It; Mount Harissa; We See; LaRue; Shabozz; Last Night When We Were Young; Decision; Webb City; I'll String Along With You.