Supercharged: Down to the Bone 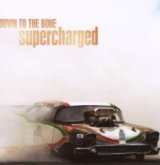 Contemporary jazz doesn't come much better than the seventh release from this UK-based ensemble led by founder and producer Stuart Wade, who plays no instruments but is very instrumental in Supercharged's bright, crisp contemporary sound.

As drummer Adam Riley, alternating bassists Richard Sadler and Julian Crampton, and guitarist Tony Remy man the rhythm section, alto saxophonist Paul "Shilts Wiemar leads most melodies in the effusive style of David Sanborn's energetic jazz pop, supported and stoked by the D.C. Horns. In the opening "Supercharged, for example, Remy's rhythm guitar riff provides the rail that keeps the tune grounded, even as hot saxophone solos threaten to jump the train clear off this track.

Two tracks with vocals, "Smile to Shine and "Shake it Up, thump out echoes of Wiemar's previous life in the Brand New Heavies, soulful R&B grooves that toy playfully with jazz. "Paradise Shuffle elegantly glides on acoustic piano, while electric keyboards play so prominent a role in "Cosmic Fuzz, and its horn chart counterpunches the melody so hard, that it sounds like a tribute to Ramsey Lewis' classic jazz-funk fusion set with Earth Wind & Fire, Sun Goddess (Columbia,1974).

"Electric Vibes features Roy Ayers on his trademark instrument, spotlighting him in the same comfortably sleek, disco-funk-jazz setting as his famous fusion ensemble Ubiquity and proves he has not lost any velocity or even one inch of movement from his funky, fluid electric vibes fastball.

Supercharged cuts Down to the Bone with a strong finishing sprint, starting with the ruckus "Space Dust. Sharp horn punches complete and counterpoint the stylish hooks in "Hip City, like the funk group Tower of Power throwing down with guitarist George Benson. With a bass-line that bounces out of the arrangement, tape loop and sticky-fingered guitar, "Make it Funky seems like the purpose of this entire exercise.

Most importantly, Down to the Bone sounds like the musicians had such fun recording the music that you almost can't help enjoying listening to it.