By JACK BOWERS
September 27, 2016
Sign in to view read count 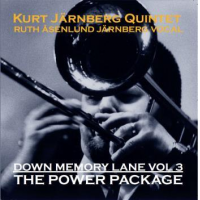 In the late 1960s, trombonist and sometime trumpeter Kurt Jarnberg led a popular jazz quintet in his native Sweden, one that lasted for only a couple of years before disbanding. Jarnberg came back with another small group in the mid-'70s, adding vocalist Ruth Asenlund (Jarnberg) to the mix, disbanded again, then returned to action with yet another group from 1986-89. The first of these bands is represented on the 2-CD set Down Memory Lane 2, the others on Volume 3, The Power Package, also a 2-CD set.

Jarnberg, who attended the Berklee School in Boston, began his career as a military musician before turning to jazz and performing in bands led by Ib Glindemann and Carl Henrik Noren as well as the Swedish Radio Big Band, the Hamburger Rudfunk Orchestra and ensembles led by Quincy Jones, Bill Russo, Kai Winding and George Russell, among others. Back home, he formed his own big band and smaller groups and remains active on the Swedish jazz scene, swinging into his early 80s. On Memory Lane 2,Jarnberg's quintet follows a pattern established by Stan Getz / Bob Brookmeyer, Zoot Sims / Al Cohn and others; that is to say, the sort of hard-charging bop that led in time to the Jazz Messengers, Jazz Couriers and similarly outspoken groups.

Jarnberg's front-line partner in the earlier quintet is tenor saxophonist Roland Keijser, a polished technician cut from Hank Mobley / Lucky Thompson / Johnny Griffin cloth, a fabric that meshes nicely with Jarnberg's Winding / Carl Fontana-influenced trombone. The rhythm section (pianist Thomas Jutterstrom, bassist Curt Andersson, drummer Leif "Gus" Dahlberg) is versatile and supportive, summoning memories from time to time of drummer Art Blakey's peerless Messengers. Jutterstrom not only comps with assurance, his solos are consistently sharp and pleasing, top-of-the-mark for their time. As for the music, it's an agreeable blend of jazz originals (most by Jarnberg) and themes by Blakey, John Coltrane, Dizzy Gillespie, Joe Henderson, Fats Navarro, Charles Lloyd and Jimmy Heath, enhanced by American standards ("Why Do I Love You," "I'll Close My Eyes," "Like Someone in Love," Leroy Anderson's enchanting "Serenata"). Note: Much of the second disc on Memory Lane 2 was recorded in concert, with sound that is appreciably less clean and balanced than the studio takes. Jarnberg plays trumpet live, mostly trombone in the studio.

The Power Package, recorded some years later (the notes aren't specific), offers more of the same plus vocals by Mrs. Jarnberg (four on Disc 1, five on Disc 2), baritone sax instead of tenor (Wolf Johansson on both discs, Bob Bertles on the Disc 1 finale, Horace Silver's classic "Opus de Funk") and a number of rotating rhythm sections with pianist Jutterstrom and drummer Dahlberg making brief return visits on both discs. It's hard to frame an accurate appraisal of Asenlund Jarnberg's vocals, as most were recorded live and the sound system does her no favors. Also, she sings in English, and it's clear that isn't her native tongue. She does have a pleasant, rather husky voice and does the best she can interpreting eight American standards and the Swedish song "I folkviseton." Instrumentally, Jarnberg's eight original compositions complement others by Silver, Charlie Parker, Ellington / Strayhorn and Fats Waller. The sound quality from disc to disc and song to song is inconstant, to say the least. Both discs uncoil in mid-flight, and "Bluesin,'" which opens Disc 2, fades out after less than a minute and a half. Again, Jarnberg alternates between trombone and trumpet, and is eloquent on both.

As a rule, these straight-ahead sets, even though recorded nearly a Bronze Age ago in jazz terms, have worn extremely well, musically. As for playing time, each of the four CDs has been filled to near-capacity, providing a total of almost 320 minutes of music. The lone drawback lies in the over-all quality of the sound, which too often shows its age. Aside from that, a generous stockpile of high-grade jazz from the Golden Age of bop, ably performed by Jarnberg and his squadrons of swinging Swedes.