Ran Blake and Christine Correa: Down Here Below 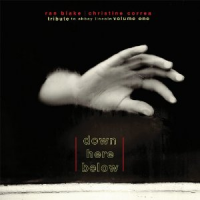 Starting with the inimitable Jeanne Lee, pianist Ran Blake has been collaborating with adventurous vocalists for half a century. These are singers who are not satisfied by merely parroting the old repertoire in the same tried and true, but also musty and tired way. These are musicians whose vocal cords command close listening, as is the case with the Mumbai-born and New York-based Christine Correa.

This Abbey Lincoln tribute, Down Here Below, is the third time Correa and Blake have recorded together over a span of 18 years. Lincoln, a musical giant, was a major influence on Lee, therefore this particular disc brings Blake full circle.

The predawn melodic chant that characterizes "African Lady" has a certain primitive Sophistication, while "Retribution" highlights Correa's agility, as she vocalizes against the grain of the melody, with Blake's angular piano alternating between quiet notes and bursts of dissonance. This kind of improvised dialogue is abundant throughout the album, but best heard on the whimsical "Little Niles," where Correa articulates the lyrics with child-like wonder, as Blake's fast runs are followed by an easing of the tempo, to bring just the right amount of chaos to the tune, much like a mischievous youngster at play.

The inclusion of two takes of some of the pieces, far from being repetitious, actually helps cement the central concept around which the record is built. The first take of the title track has Correa's vocalese blowing free, like a saxophone solo, and in its wind Blake's piano keys ring like chimes in a seemingly random way while simultaneously creating a dark and complex sound that set the mood for the rest of the session. There is a church-like mystique with a heartbreaking yearning as Correa's gentle hesitant singing takes the spotlight backed by Blake. The second take features Correa unaccompanied, articulating the lyrics with more anger, more vigor and less melancholy.

Title: Down Here Below | Year Released: 2012 | Record Label: Self Produced