Graham Collier: Down Another Road / Songs For My Father / Mosaics 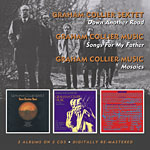 These days, British bassist Graham Collier is often considered more as a composer/arranger/bandleader, especially with archival issues like Hoarded Dreams (Cuneiform, 2007) and Workpoints (Cuneiform, 2005) placing emphasis on large ensemble work (though one disc of Workpoints featured a sextet). It's easy to forget that, during the late 1960s and early 1970s, he released some of the finest small ensemble jazz to come out of the UK, most notably a string of three titles that, up until now, have been out of print—Down Another Road (Fontana, 1969), Songs For My Father (Fontana, 1970) and Mosaics (Philips, 1971). Thankfully, BGO has brought these three titles together as a remastered double-disc set, and they provide ample evidence of the consistent thread of Collier's writing and overall musical conception, as performed by three very different bands.

There is one other common element amongst the three albums, and that's Barbados-born but British-associated trumpeter Harry Beckett, who continues to make fine music these days, including his collaboration with Belgian group The Wrong Object on Platform One (Jazzprint, 2007). By 1969 Beckett had already established himself as one of the country's top trumpeters alongside another foreign ex-pat, Kenny Wheeler. His playing here is as inventive as expected, whether it's on the 17-minute "Danish Blue, where Collier's writing is more like a series of roadmaps and an overriding arc that brings together a series of solo and ensemble improvised passages, or his tender flugelhorn solo on the balladic "The Barley Mow, which also features pre-Nucleus/Soft Machine keyboardist/reedman Karl Jenkins on oboe.

With these three albums coming, as they did, around the same time as Miles Davis' major foray into electric music, these are all-acoustic sets and, while there's a certain funkiness to the up-tempo "Aberdeen Angus, largely due to Collier's locked-in playing with another soon-to-be Nucleus/Soft Machiner, drummer John Marshall, there's something unmistakably yet indefinably British about these sessions. Even when John Taylor replaces Jenkins for Songs For My Father, and the music turns modal on "Song One (Seven-Four) and "Song Three (Nine-Eight Blues), where Taylor's early promise is highlighted, it's still music that couldn't come from anywhere but the UK.

Collier recruits a wealth of British jazz players, including saxophonists Stan Sulzmann, Alan Wakeman (another soon-to-be Soft Machiner) and Alan Skidmore, along with drummer John Webb and pianist Geoff Castles, for a series of charts that were innovative for their time in their use of irregular and/or constantly shifting meters. While each album has its own complexion, central to all is Collier's exploration of the nexus where form and freedom meet. Collier's writing is undeniably compelling, but without the freedom that he afforded these three groups, they'd simply not work. Instead, whether the music is sketch-like structure or more formal composition, the music on this double-disc set leaps out of the speakers with the kind of life, sensitivity and expressionism that's defined this seminal British musician then, and ever since.