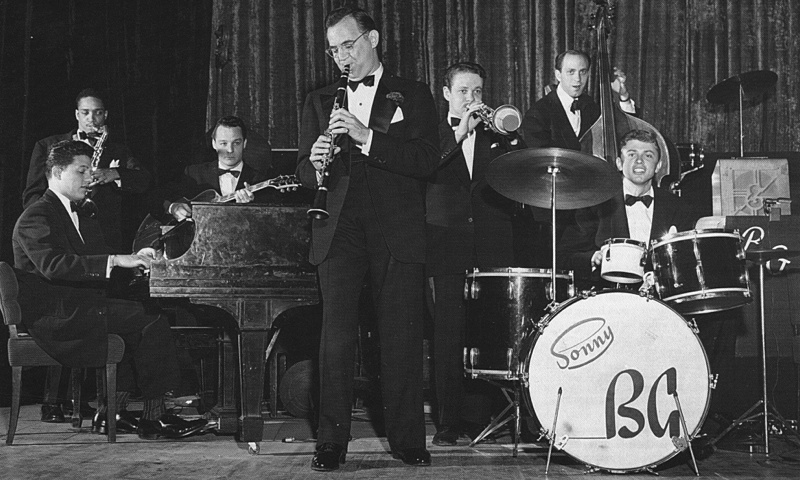 By RICHARD J SALVUCCI
August 23, 2013
Sign in to view read count
Douglas (Doug) Voll Mettome, the son of Nels P Mettome and Leafy Dawn Mettome was born into a prosperous family on March 19, 1925 in Salt Lake City, Utah, where he died on February 17, 1964. He was one of two children (a younger sister attended Northwestern University).

Doug's musical career began early. His first training was on piano, but by the age of 12, he had begun to receive newspaper notice for his trumpet playing: "Doug played some bugle calls and a trumpet solo. When he played "Reveille..."91 year-old Charlie Shields woke up and saluted." (Salt Lake Tribune, February 13, 1937) Doug was also a member of what eventually became a group of three students who bugled at the striking of the colors at the local Veterans' Hospital each night at 5—an activity he had joined in 1933 at the age of eight. "There isn't any special reason for doing this," Mettome was quoted as saying. "we just thought it was a good thing to do." (Salt Lake Tribune April 11, 1939). By 1943, Doug had his own band, "Doug Mettome and his "'Swingout' Rhytmaires"

And he was, by all accounts, a superior athlete. He was involved in competitive ski jumping by the time he was 13. By the age of 16, Doug was a competitive cyclist, winning races and vying for a state championship.

He graduated from East High and was attending the University of Utah when World War II broke out. He enlisted at age 18 and spent World War II (1943-46) in the 745 Army Air Force band. By all accounts he had started to make an impression on other brassmen as a player in the service. I suspect if you had asked anyone in Salt Lake about him when he went into the service, they would have predicted he was bound for great things. The All American Boy as Trumpet Player.

In early 1945, while still in the service, Mettome married Catherine Ransford Wade in Louisville Kentucky, where he was stationed. Mettome had previously been in Detroit, because he was initially to have been married there in December 1944. The first real notice of him to surface as a player was in Detroit in 1946, so he had presumably made contact with a fertile jazz scene there. Barry Ulanov heard him jamming at the River Rouge Show Bar with drummer Art Mardigan and described Mettome as a "talented trumpeter" who had been deeply—Ulanov used the word "slavishly" influenced by Dizzy Gillespie. In 1946-47, Doug joined Billy Eckstine's band. Some maintain that he was recommended by Miles Davis, who was also briefly with Eckstine, while others suggest that Mettome and Davis had become close because Mettome, even as a white musician (and at that point, the only one with Eckstine) was unwilling not to stay with the band on the road because of segregation. Mettome now met drummer Art Blakey, who was to later remark that he thought Doug could have played either jazz or classical trumpet, which was a bit unusual in the late 1940s.

By late 1947, Mettome was recording with Allan Eager in New York, taking solos on "Nightmare Allen" and "Churchmouse." While there are some echoes of Dizzy's licks in them—especially his ubiquitous triplets—, both solos favor the middle register and are built around longish legato lines that never get much ahead of the beat. 1948 found Doug playing with the Buddy Rich big band where he plays an expressive chorus on "Somewhere Over the Rainbow" that displays a full tone that characterized in his ballad playing. He also took a brash upper-register solo on "Aaron's Axe."

Doug really appears to have come to public notice while with Benny Goodman. Mettome impressed just about everyone while playing with Goodman, including Benny, who was later to name him one of his two favorite trumpet players (Chris Griffin was the other). Doug toured extensively with Goodman and played some of his best-known (and best shaped) choruses in 1948 and 1949. He replaced Fats Navarro in Goodman's Sextet, not surprisingly perhaps, in view of their stylistic similarities. As Ross Firestone put it, "Fats Navarro was hired for the solo trumpet chair, but occupied it only briefly. After he kept showing up late for rehearsal, Benny let him go and brought in Doug Mettome, a brilliant twenty-three year old who had replaced Navarro in the Eckstine band in 1946." Buddy Greco recounted Mettome's role to Firestone: "When I had my Benny Goodman hat on, I played Benny Goodman music. When we turned into a bop band, I tried to play like Bud Powell. Wardell [Gray] and Doug Mettome did the same sort of thing. When Benny was fronting the band, Doug got into a Roy Eldridge bag; then later on in the evening he switched over to Dizzy or Miles. Doug was a genius player, and Benny was very, very hot on him. In fact at one point he wanted to send him out on his own doing a more commercial kind of thing à la Harry James. Unfortunately, Doug had some personal problems, but he was some talent."

Greco was not specific about Doug's "personal problems," but at least one of them was the death of his wife, Catharine Wade, "after an operation" in New York City in early August, 1949. (Salt Lake City Tribune, Aug. 9, 1949). There is unfortunately very little recorded about this. One musician, who played with Mettome on the Goodman band, had no recollection of Doug ever discussing a family, one way or the other. The late Leon Merian, another trumpet player who knew Doug from his time with Pete Rugolo, was aware of the event. He reported in an interview that it had had a devastating impact on Mettome, which is somewhat less surprising. Sixty years on, unfortunately, memories, understandably, fade and often blur. Another former band mate described Doug as "introverted" and doubted there were too many people who knew him well. If Goodman had tried to induce him to front a commercial band, it's doubtful Mettome would have been interested in any case. By most accounts, he disliked that part of the business as much as anyone and was basically interested in playing jazz.

And yet the last word that anyone would use to describe Mettome's work with Goodman would be "introverted" or even, perhaps, "reflective." To the contrary, what was probably his most famous solo occurred on "Undercurrent Blues," which was recorded while the band was in Los Angeles in February 1949. The topside of the recording is "Ma Belle Marguerite," a vocal that featured Buddy Greco. If your taste runs to English light opera ("Bless the Bride"), you may enjoy it. If not, the flip side is the winner, "Undercurrent." This was not the first time that Goodman had recorded it. There was a V-Disc made in mid-December 1948 which is slightly different in tempo, but which also features a hard-swinging chorus by Wardell Gray. Unfortunately, that chorus is absent from the February 1949 for reasons that are not clear. The 1949 recording is different in other ways. It is taken slightly faster, but the interesting comparison comes with Mettome's solos.

On the V-disc, Mettome's first eight-bar break opens with repeated Bb triplets that rapidly move up a fourth, and sound, for all the world, like a stylized quote from Kay Keyser's hit 1948 recording of the Woody Woodpecker song. But when he reenters for a second chorus, misfortune, if not disaster, strikes. He runs off a Bb major ascending scale with some assertion, but appears to stumble coming off of it in another triplet figure, and then plays an outright clam on the way out. A natural reaction is to regard it as a powerful performance marred by a stumble from which Mettome doesn't recover. The LA version is, while very striking, a more conventional solo, opening with Dizzy's signature triplets. But this time, the "Woodpecker" triplets are executed in the upper register in his second chorus and the ascending scale is rearranged into something resembling a bop Arban's exercise, perfectly executed in the "near" upper register. When Goodman solos, it is in a way that makes it clear he really likes what he's heard. His chorus is reminiscent of his reply to Bunny Berigan on "King Porter Stomp" (1935) of which Ross Firestone writes "Benny...almost bubbles over with delight." Small wonder. The entire production, arranged (and written?) by Chico O'Farrill, ends on a screaming concert Bb. It is a memorable performance.

The comparison to Berigan is not entirely coincidental. Leon Merian regarded playing with Mettome as "the closest I came to playing with Berigan," and elements of Bunny's style, by no means out of place in a transitional figure like Mettome, are evident in some of his other recordings with Goodman. One was "King Porter Stomp" itself, which Gunther Schuller characterized as a "near-perfect performance" in the original, and Berigan's introduction as "supremely authoritative." In a 1949 recording, Mettome has Berigan's solo, and his paraphrase of Bunny's introduction is a knowledgeable, but by no means "slavish" update.

Doug's sixteen-bar chorus is wild, as exuberant as anything he ever played with Goodman, and pure swing. Whether or not he reached Bunny's level is debatable, but the excitement he generates (along with the propulsive drumming of Sonny Igoe) is palpable. The real test comes, however, with "Blue Lou."

Berigan played "Blue Lou" in a Metronome All Star Band in 1939 with what was basically Goodman's reed section and Benny himself and Berigan's "stride trumpet" style is on powerful display (as is, incidentally, Sonny Dunham's). Charlie Shavers and Bobby Hackett had also played the tune, so the stakes for a trumpet player were pretty high. To say that Mettome acquits himself well is a mild understatement. His solo exploits the alternating minor-major/ major structure of Edgar Sampson's classic with an exceptionally fluent solo, which is only enhanced by Doug's growl (or near-running out of breath!) near the end of his chorus. Goodman once again responds enthusiastically, and Buddy Greco's eight-bar piano break picks up one of Doug's phrases and extends it.

Chico O'Farrill's "Fiesta Time" once again hits a much more boppish note. The tune is taken at a blazing pace and it's hard to suppress the idea that here we have Rhythm changes taken as fast as anyone can play them. It's safe to say that Mettome's solo is more Dizzy than not, and for the most part, executed very cleanly. If there was ever any doubt about whether or not Wardell, Doug and Benny could fly, this recording will put them to rest. Doug plays another Dizzy-inflected chorus on "Bop Hop." There's also a cover of Dizzy's "Land of Oo-Bla-Dee" with good solos by Wardell and Doug—oddly enough supposedly recorded before Gillespie's 1949 version. 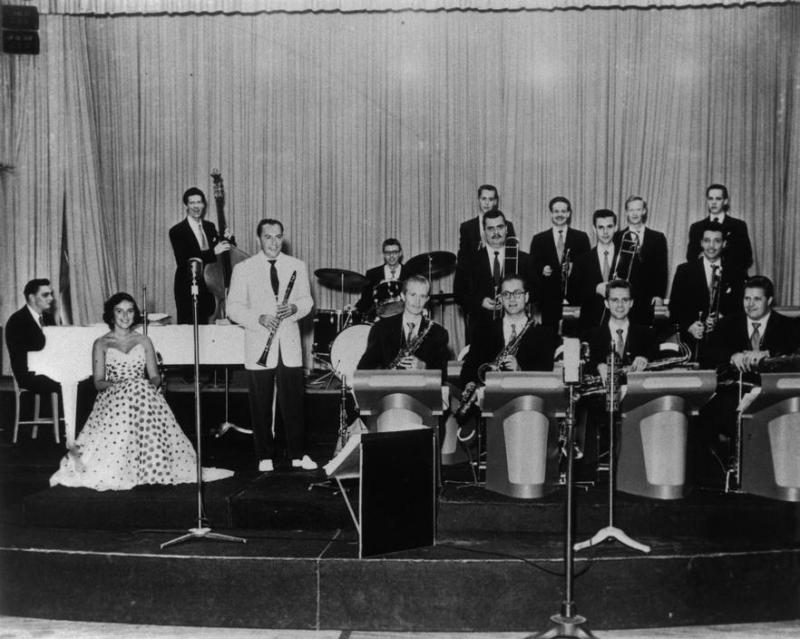 On balance, it's probably safe to conclude that Mettome's stint with Goodman represented one of the high points of his career, and that his playing in 1949 was, with few later exceptions with Woody Herman or Pete Rugolo, never surpassed. Another such indication is a live recording that Mettome made with the Herbie Fields Septet at the Flame Club in Minneapolis in November 1949.