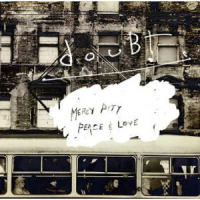 Quick, name a jazz-rock trio fronted by a dazzling virtuoso keyboardist and a prodigiously talented electric guitarist that plays in a hyper-aggressive no-holds-barred style which combines edgy free improv with a heavy '70s rock sound. If you answered "the original Tony Williams' Lifetime" you aren't alone. One current trio actively probing the outer reaches of jazz and rock using the keys / guitar / drums format is the British / Belgian / American trio DouBt. Though keyboardist Alex Maguire, unlike Larry Young in Williams' famed trio, is not primarily a Hammond B-3 player he accesses an array of old- school analogue and newfangled digital keyboards to craft an ever- changing and dynamic sound that evokes the smell of hot tubes and burning wires while being utterly 21st Century. The trio's irrepressible guitarist Michel Delville is at home in virtually any musical context. In a scene crowded with hotshot guitar heroes, he has an immediately identifiable sound and the maturity and pacing of his solos truly stands out. Yet, when he wants to, he can get right up in your face with loud, distorted shredding like some crazed teenager. Drummer Tony Bianco is, along with Maguire, a longstanding member of the UK free-improvised music community. He's at his best when the music permits him to float and jab at random—as on "Rising Upon Clouds," "The Human Abstract," and the lengthy title track—though his role in douBt is largely rhythm-oriented.

Mercy Pity Peace & Love is a logical extension of the band's 2008 release Never Pet a Burning Dog. The music is a mashup of free improv—both groove-based and non-groove-based—and high octane '70s-style jazz-rock fusion with a phantasmagoric patina of psychedelic prog rock. The CD opens with "There is a War Going On," a rave-up that combines astute pre-recorded oration by US Rep. Bernie Sanders with an insistent B-3 riff. Delville comes out swinging with a jabbing, pummeling solo and basically never lets up for the remainder of the CD. The cover of Jimi Hendrix's "Purple Haze" storms out of the blocks in grand fashion, with Delville absolutely wailing over the loosely-interpreted classic riff. For a moment, it's not hard to imagine the original Tony Williams' Lifetime has sprung back to life! After Delville's opening salvo, Maguire leaps in and the energy level simply skyrockets. While Bianco sounds a little less comfortable here than he does on the CD's other tracks, he gets the job done.

By contrast, "Jalal" is a chilled groover fuelled by Bianco's in-the- pocket drums and a knotty sequenced rhythm à la early Medeski Martin and Wood. "Mercury" uses a similar approach quite successfully, albeit lighter and without the sequencer. Maguire's restless piano solo on the latter evokes countryman Keith Tippett. Perhaps the most effective and interesting piece on the CD, "No More Quarrel With The Devil" conflates a mutated King Crimson riff with a hilariously straight, almost classical-sounding riff that would make Percy Grainger smile. Some more skillful borrowing features prominently on "The Invitation," which echoes John Coltrane's classic composition "Equinox" in an effective way. A tense, dark ballad, "Goodbye My Fellow Soldier" closes this otherwise up-tempo, energetic session on an uncharacteristically somber note, though it showcases the trio's tremendous musical range.