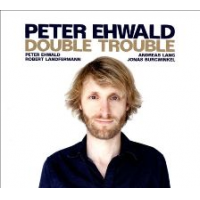 It doesn't always follow that the teacher channels the direction a student takes. In separate stints in London and New York, German saxophonist Peter Ehwald has studied with bassist John Patitucci, saxophonists Julian Arguelles, Stan Sulzman and Rich Perry, yet his style is not nearly as based in the tradition as might be expected. Ehwald displayed his quite contemporary idiom on the Italian outfit Monome's debut recording, Monome (Konnex, 2012), and explores Korean folk music with Shin Hyo-Jin and Bo-sung Kim in the trio Ensembe ~ su. Double Trouble is another forward-looking creation, with two bassists central to the quartet's dynamics.

It's hardly unchartered territory, as there are numerous examples of leaders employing dual bassists, from saxophonist Ornette Coleman to trumpeter Cuong Vu. Nevertheless, Ehwald juxtaposes bassists Andreas Lang and Robert Landfermann judiciously, creating music that has the formal sophistication of a chamber ensemble yet which draws from free-jazz and indie rock in equal measure. This fusion is perfectly embodied in "In Gent," with arco switching between classical lyricism and rock-type feedback, bridged by drone. As Landfermann and Lang follow independent grooves, drummer Jonas Burgwinkel's dynamic stick work drives Ehwald's flowing improvisation forward.

The frenetic "Speed Dating" centers on Ehwald's manic blowing and flies by with the sort of punkish disregard for jazz convention evocative of now defunct London quartet Acoustic Ladyland. The ruminative "Middledrone" and the skeletal frame of "Double Trouble" both exhibit a tenderness that's in stark contrast to the garage band energy and rhythmic flurry of "Speed Dating." There's a sense of collective freedom on the mid-tempo "Bohdan"; saxophonist and drummer in particular stretch out, though Ehwald leaves generous space for a dual bass solo. The leader's purring lyricism colors the slow blues "Teheran," a reworking of bandleader/pianist Duke Ellington's "Isfahan."

A Thelonious Monk-like skittishness characterizes the intro of "Opener," though fast-walking basses and Ehwald's post-bop athleticism bring greater momentum to the most traditionally straight-ahead tune of the set. "Lehrsetitenballade" is a curious short piece that pitches crying cymbal and high-pitched sax squeals with balladic bass; in the end, everyone is singing—in tune—from the same hymn sheet. Ehwald's delivery is measured on the gently paced "Glory" and, in truth, impresses most when not in a hurry, pursuing unpredictable yet perfectly logical lines evocative in spirit of saxophonist Wayne Shorter.

Switching from tenor to soprano saxophone on "Bass Ticket," Ehwald leads the quartet through a slow, edgy intro of brooding arco and restless percussion. A plaintive soprano melody and a steady bass ostinato steer the quartet into more unified territory, though the overwhelming feeling remains one of melancholy.

Ehwald divides his energies between nine or ten different combos and it's perhaps this very flexibility that lends such an open-ended, experimental feel to the music here. By turn provocative and freewheeling, intimate and blue, Ehwald embraces the rhythmic and narrative possibilities afforded by two bassists but is certainly not bound by it. There's plenty to admire in Ehwald's compositions and the promise of greater collective adventure to come from this impressive quartet.