By DAN BILAWSKY
November 11, 2010
Sign in to view read count 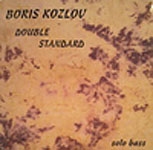 Selling a solo bass disc—both artistically and commercially speaking—is no easy feat. The demanding physical aspects of such a project, requiring a bassist to have the endurance to sustain perpetual motion and interest on such a behemoth of an instrument, is one problem. Another issue is general marketability. The average jazz fan might be quite happy to sit through a lengthy solo piano or guitar program, but solo bass is another story. While these two areas of concern have led some bassists to shy away from recording a solo project, others, like Boris Kozlov, have forged ahead, undaunted by the potential pitfalls.

Kozlov, best-known for his role as bassist, arranger and musical director with the various Sue Mingus-sanctioned Charles Mingus tribute outfits, isn't afraid to roll up his sleeves and get down to business. His own "Kowloon Bass Check" starts things off with a bang, as he occasionally provides deep anchoring notes amidst rapidly running lines. The music then moves toward a slower, blues-infused section, with an implied swing feel.

While Kozlov follows that up with a nod to the great Miles Davis with "Solar," his take on Billy Strayhorn's "Isfahan" is of greater interest. A large part of Strayhorn's magic came from the way he would voice a chord across a big band, so performing one of his pieces as a solo bass work presents a particular challenge. Fortunately, Kozlov's mastery of pacing, ringing notes and quickly strummed sounds allows for a broader sense of harmony than might be expected here, and the music even takes on a bouncy feel toward the end.

Joe Henderson's "Inner Urge" is a real barnburner, giving Kozlov another chance to flex his finger muscles, but the best bass bounty comes after it. "RGB/Self Portrait In 3 Colors" features multiple arco overdubs that create a deeply resonating heaven of harmony. At first, a lone plucked presence is heard, but then an angelic arco line, producing cello-like sonorities, joins the mix. Extra bowed lines are added, until a rich blend of bass voices rings through the speakers. While multiple bass overdubs have the potential to sound muddy, Kozlov's expert intonation keeps everything in balance.

Stevie Wonder's "Overjoyed" maintains an upright stature (no pun intended) as Kozlov delivers the piece with a sensational rhythmic sense. Ringing overtones add to the performance and create some brilliant sounds. Scott LaFaro, famed bassist with the Bill Evans Trio, is given his due with "Gloria's Step," and Horace Silver's "Peace" takes on a recital-like air with Kozlov's quasi-classical arco interpretation. The bassist's own "Anatole," which slowly draws interest and eventually picks up on a bouncy Brazilian vibe, closes out the program. Double Standard may not find a huge audience, but the audience that finds it will have plenty to appreciate.