By KARL ACKERMANN
February 12, 2016
Sign in to view read count 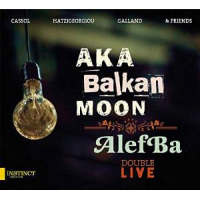 The music of the Balkans has been progressively finding a prominent place among Western listeners of creative music in the past several years, though its presence has been a relevant factor for decades. Notably Raya Brass Band, Eastern Boundary Quartet and Balkan Beat Box have directly and indirectly incorporated the regional influences in the context of post-modern approaches blending regional folk, world and jazz elements. A number of like-minded musicians—the core trio, Aka Moon (billed here as the "AKA Balkan Moon" project), and the large collective known as AlefBa, come together on Double Live two-CD set of astoundingly good music.

With seventeen previous recordings, dating back to their self-titled debut in 1992, it's a wonder that the Belgian avant-garde Aka Trio is not more widely known. Saxophonist Fabrizio Cassol, drummer Stéphane Galland and bassist Michel Hatzigeorgiou have been together since the formation of the group which does not represent the acronym "also known as" but symbolizes the native Central African Republic tribe pronounced "AH-kah." The three had traveled to that country and studied the tribe's process of musical creation before adopting the name.

The trio has a remarkably diverse portfolio of albums. A classical recording Cassol: VSPRS Orchestra (Cypres, 2006), the group expanded to a quartet, including pianist Fabian Fiorini on In Real Time, (Carbon 7 Records, 2001), and the Jimi Hendrix, Jaco Pastorius and John Scofield inspired Guitars (De Werf Records, 2002) with David Gilmour and Pierre Van Dormael. Their work that most closely aligns with the ideas behind Double Live, is Culture Griot, a collaboration with Malian talking drum master Baba Sissoko and the griots of the group, Black Machine (Cypres, 2010).

A suburb live recording, with minimal audience applause, and seven tracks that clock in over the double-digit mark, Double Live was mostly recorded in the Cathedral of Tournai in Belgium. Cassol penned eleven of the thirteen compositions with one other being a traditional Bulgarian folk song and one, an improvisation. The influence of the Balkins is most strongly felt on the first disc where "Baba" and "Dali" both incorporate Bulgarian folk tunes and "Bulgarian Study" is informed by the same. "Upon Mi-Si-La" blends a Bosnian tune with another regional folk song. Each of the pieces has an infectious and joyful ambience and an adventurous improvisational approach.

Though the second disc goes down a different path, the musical characteristics are much the same. The AlefBa project brings a dozen additional musicians to the stage including the great Amir ElSaffar, flautist Magic Malik, oud player Mustafa Said and others from Syria, Egypt, Lebanon and Europe. But the reach of the music is broader, extending to Turkey, Iraq and beyond. Here too, the Balkans are an influence, at least underlying, and in the midst of improvised Arabic poetry and music from sources known and unknown. The second disc has Arabic language vocals on most tracks, sometimes building from a slow psalm-like treatment to a sometimes frenzied pace as on "Monkey," which then reverts to a quiet solemnity at the close. The sole instrumental on the second disc is "Sinaï" which is a great example of the collective's ability to merge all these forces in a coherent setting.

Aka Moon's overall sound is a loose blend of jazz and world music with a purpose. It is a musical global crossing that is really unequalled in its ability to truly convey disparate musical influences in a coherent, accessible and completely enjoyable way. Beyond the music, Aka Moon proves that there doesn't need to be an overt political agenda for music to have a political impact. It can be simple and as profound as inclusion. It's a beautiful album.