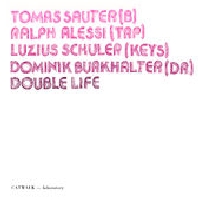 For those who are always looking for, and expecting, new sounds, this session will shock in how retro it sounds. The overall vibe is, superficially, 'soft groove' atmospheric background music projecting the image of low lights, glasses of wine and an overstuffed sofa—and it can be listened to in that way. The tunes/themes/grooves are simple harmonically, usually starting with a section which oscillates between two tonal areas supported by repetitive bass figures and light drumming, overlaid with electric keyboard or trumpet solos, leading to a turnaround and starting over. The overall energy level is low, tempos are moderate with just enough bump to tap your foot, and the drumming is unobtrusive.

However, the description above, which might indicate less than engrossing music (who needs Barry White lite?), is only a deception and listening a little more deeply uncovers layers of deeper musicianship.

Both Alessi's and Schuler's solos jump in and out of both the rhythm and the harmony enough to surprise the ear without shaking the free from the groove. For his part, Burkhalter plays lightly, but incisively, providing an infectious rhythmic groove without being overbearing.

Quite a few tracks have melodies that will stick in the mind and the cumulative effect is to be drawn in, slowly but surely. The flame of intensity is of a slow burn, of glowing embers, rather than that of a blowtorch. A standout track is "As Night Falls" which is pure sound painting, with Alessi atmospherically floating above a somewhat ominous bass line that is softened by luxurious keyboard harmony. Alessi originally studied bass as well as trumpet and "Deep Conversation" finds Alessi joining Sauter on bass in an improvised musical discussion which is a most appropriate ending.

The album's hour playtime flies by without a moment that feels rushed, and the immediate impulse is to press replay, to listen more closely, if not to let the grooves do their work.