By STEPHEN LATESSA
March 9, 2006
Sign in to view read count 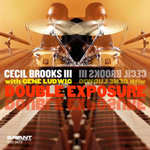 The liner notes for Double Exposure recount that the disc was recorded in a few spare hours that drummer Cecil Brooks III and organist Gene Ludwig found themselves with while they were recording another album. That feeling of spontaneity and casual inspiration is very present on this rare organ and drum duo effort.

Ludwig is a veteran who has been performing since the early '60s. His style is very much in the same vein as the other more well-known soul-jazz players of the era. He achieves a rich, stately and swinging feel, all at the same time. His work at the end of "Serenade in Blue reveals the majesty of Hammond B-3 in full flight with a long, sustained burst of sound. Elsewhere, on Stevie Wonder's "Black Beauty, Ludwig takes an opposite route, showing off some fast finger work.

Brooks' playing throughout is steady and unobtrusive. He seems to sense that the best path to take when backing up an organ player is to keep things simple and make sure the proceedings don't get too abstract or loose. On his own composition, "Double Exposure, Brooks opens with some tensely rhythmic pounding that morphs into a slinking groove. He also gets to strut his stuff with some skittering breaks on Neal Hefti's "Cute.

Double Exposure is a fine, relaxed effort showcasing two musicians who play together with a great deal of comfort and conversational grace. The recording session was definitely a few hours of time well spent.

On The Trail; Serenade In Blue; Tea For Two; Bird of Beauty; Double Exposure; I Can't Give You Anything But Love; You've Changed; Cute.