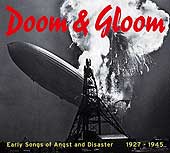 We might be living in troubled times but this compilation proves they're not unprecedented. Every misery is covered here, ranging from the wrath of nature to the eclipse of humanity's highest practical achievements, with a side order of war and conflict thrown in for good measure.

The thematic approach means the music straddles the racial divide; what unites the two is the theme of misery. Thus, both Blind Willie Johnson's "God Moved On The Water" and the Cofer Brothers' "The Great Ship Went Down" deal with the sinking of the Titanic, the dissimilarity of their approaches to the theme notable despite the shared quality of lamentation. Johnson's slide guitar playing still sounds extraordinary after all these years and the fervour of his faith comes across as powerfully as it ever has. On the same theme William and Versey Smith's "When That Great Ship Went Down" marries driving guitar with rhythmically complex tambourine to create a compelling statement enhanced by Versey's braying second vocal part. It's not in any way complementary with Richard 'Rabbit' Brown's "Sinking Of The Titanic" in which Brown's extraordinary vocal delivery might have listeners lamenting over the fact that the late Kevin Coyne never committed a version to record.

Flood, rife as it is with Biblical implications, is a big preoccupation here. Big Bill Broonzy's "Southern Flood Blues" is notable for the extent to which it avoids apocalyptic overtones, Broonzy's preoccupation with earthly, practical things having the effect of placing the development in another context. It's also some kind of complement to Charley Patton's "High Water Everywhere -Part 1" despite the fact that Patton's accent will always render some of the lyrics unintelligible.

Big Joe Williams's "Providence Help The Poor People" is notable in such company for its lack of affinity with issues of natural disaster and the like. His guitar playing, presumably on his patented nine-string, is extraordinary for its singularity, whilst he puts out a lyric more concerned with economic depression and its effects than anything else here.

Time and again here the sophisticated primitivism of the musicians' world view is notable, symbolic as it is both of a world that has passed due to human advances and to one that's still with us in terms of mortality's sheer arbitrariness.

God Moves On The Water; Wreck On The Highway; Baltimore Fire; Southern Flood Blues; That Crazy War; When That Great Ship Went Down; When The Atom Bomb Fell; He