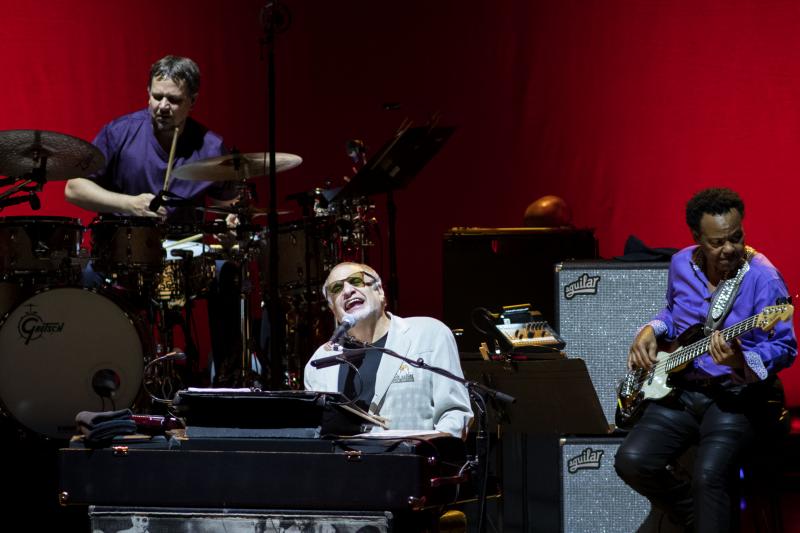 If there is one tried and true adage that is applicable to the arts, it is the one that goes "everything old is new again." Be it a need for monetary sustenance, a love of touring, or a little bit of both, we have seen an increase in the number of summer tours featuring iconic acts from the '70s and '80s. As such, it really was no surprise when it was announced that The Doobie Brothers and Steely Dan would partner up for their "The Summer of Living Dangerously" tour which kicked off on May 10th in Charlotte.

Making a stop on this extended tour encompassing more than thirty cities and wrapping up on July 14th, the pair of acts recently took to the stage at the beautiful Blossom Music Center located within the Cuyahoga Valley National Park. While it might seem as an odd pairing, the connections are there if you dig below the surface. For starters, Michael McDonald was prominent in the vocal mixes of many Dan sides and might be the most notable member of the Doobies, staying with the band from 1976 until 1982. More obvious is that both groups have remained active over the years through periodic albums of new music and summer tours.

Clocking in at a bit over an hour, The Doobie Brothers delivered the opening performance and featured veteran members Patrick Simmons, Tom Johnston, and John McFee. One of the intriguing factors of the original lineup was the use of two drummers, and although the current personnel includes a trap drummer and percussionist, the effect is just not the same. Another key sound of the band during its heydays, Michael McDonald's voice is not the type of thing that one can recreate successfully. Wisely, the current incarnation avoided all but one tune associated with McDonald. Their cover of "Takin' it to the Streets" was probably unavoidable and was none the worse for not having McDonald present.

Simmons was always an integral part of the band's chemistry and his delivery of "South City Midnight Lady" was terrific in its nostalgic allure, complete with John McFee's backing steel guitar riffs. "Black Water" worked in the same manner with Simmons on acoustic guitar and the versatile McFee on violin. All three lead men were also striking when they launched into succeeding solos over the course of "Jesus is Just Alright."

The late and much lamented saxophonist Cornelius Bumpus made a mark with his contributions to several Doobie Brothers albums back in the day. In that tradition, Marc Russo was brought into the fold for the tour at hand and was heard on both alto and tenor saxophones. His statement on "Long Train Running" was particularly incendiary, although the compressed sound mix rendered his high notes as shrill punctuations. In general, the sound was far from perfect, although owing to the large lawn crowd there was probably a need to pump up the volume. An encore of "China Grove" and "Listen to the Music" wrapped up a polished, if a tad bit run-of-the-mill opening gambit.

If McDonald was missed during the Doobies show, undoubtedly loyal fans were pondering the effect of the absence of Walter Becker during the upcoming Dan set. Although early shows last year right after Becker's death featured an unused microphone stand paying homage to the guitarist, not much was made of Becker's absence save for some sincere comments from Donald Fagen about his musical partner. But while Becker's wry sense of humor and sagacious band intros were missed, the music was not the worse for the wear and typically inspired results were in the offing.

As customary, the front of Fagen's Fender Rhodes was adorned with an early photo of the Ellington band and his penchant for the jazz life was evident in the opening swing number featuring baritone saxophonist Roger Rosenberg, tenor saxophonist Walt Weiskopf, trumpeter Michael Leonhart, and trombonist Jim Pugh. When Fagen joined the fold, he launched into a string of radio-friendly hits including "Black Cow," "Hey Nineteen" and "Black Friday."

A tour-de-force for master drummer Keith Carlock, "Aja" was delivered with a fresh sense of élan, and featured Fagen on his trusty melodica. The classics then kept coming with "FM," "Kid Charlemagne" and "Time Out of Mind," the latter serving as a fine vehicle for the backing vocals of Carolyn Leonhart and La Tonya Hall. During "Green Earrings" Fagen opened things up to allow for some superb jamming from Jim Beard using an organ patch on his keyboard and the dependable Jon Herington on guitar. Right after Roger Rosenberg's blustery bari sax solo, the two even traded licks back and forth to the obvious pleasure of Fagen.

Leonhart and Hall would be up front again to deliver "Dirty Work," a number that Fagen referred to as coming from "the Stone Age." Carolyn's brother, Michael Leonhart, would also take the front microphone for one of his concise, yet piquant solos. In lieu of Becker's musician introductions, the band grooved on The Crusader's "Keep That Same Old Feeling" while taking turns introducing each section of the ensemble.

Having already engaged with the high energy level coming from the stage, the audience was brought to its feet starting with "Bodhisattva," where Herington's guitar reached a fever pitch. They continued standing and swaying over the course of the remaining few performances. Having already impressed with his mastery on "Aja," Carlock took the drum break at the end of "Josie" as a jumping off point for an incendiary drum solo of epic proportions. As the final strains of "My Old School" brought the festivities to a close, any doubts of the future of the Dan without Walter Becker seemed to fade away, although he was surely there in spirit.