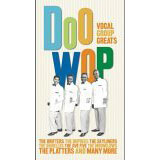 Shout Factory has again released a companion boxset to a PBS special scheduled for December, this time dealing with the golden era of doo-wop music. The founders of Shout Factory (the brothers Foos) released a similar boxed collection of doo wop in an earlier incarnation at Rhino to critical and consumer acclaim, and they hit the same mark this time around by collecting and documenting this aurally pleasing and satisfying era in American music.

The collection contains the venerable who's who in doo wop music, including R&B-flavored groups like The Miracles with Smokey Robinson, The Drifters, and The Shirelles; and the more rock 'n' roll-sounding Dion, Hank Ballard and the Midnighters, and Frankie Lymon and the Teenagers.

This collection takes an interesting tack: instead of trying to offer a completist vision of the doo wop genre, like the earlier Rhino collection, perhaps, it provides a pure flow of music and entertainment that easily makes one forget the artists and recordings that may be absent.

Several of the classics and necessary repertoire appear in this package. Hank Ballard's "Work with Me Annie scored a huge hit for King Records and serves as a great early example of the marriage of doo wop, rhythm and blues, and early rock 'n' roll. In addition, other hits and essentials are featured, such as The Platters' "Smoke Gets in Your Eyes, The Tokens' required a cappella group standard "The Lion Sleeps Tonight, The Drifters' "This Magic Moment, The Miracles' "You Really Got a Hold on Me, The Five Keys' "The Glory of Love, and The Moonglows' "Blue Velvet (though I wish they had chosen "Sincerely, since it is one of the earliest examples of doo wop and one of the genre's first hits). The box contains another 53 doo wop treasures, making this sixty-track coupling pure fun.

In addition to the great recordings, Shout Factory has put its usual care and attention to the overall box set experience. Bill Dahl penned a thorough and informed essay about the genre and many of the artists included. The photographs are sharp, providing visual insight into many of the groups and artists contained within. Of course, I'm ecstatic that the liner notes include release dates, original labels, and catalogue numbers, though I wish that the names of the singers, musicians, and studio personnel could have been included, where that information could be confirmed.

CD1: The Cardinals: Come Back My Love; The Five Keys : The Glory Of Love; The Five Keys: Out Of Sight, Out Of Mind; The Flamingos: Love Walked In; Platters: Twilight Time; The Moonglows: Blue Velvet; The Diablos: The Wind; Hank Ballard & The Midnighters: Work With Me Annie; The Harptones: My Memories Of You; The Heartbeats: Down On My Knees; Vernon Green & The Medallions: The Letter; The Six Teens: A Casual Look; The Moonglows: Please Send Me Someone To Love; Jessie Belvin: Goodnight My Love (Pleasant Dreams); The Rivieras: Count Every Star; The Chantels: Every Night (I Pray); The Shirelles: I Met Him On Sunday (Ronde-Ronde); The Jive Bombers: Bad Boy; The Dominoes: Sixty- Minute Man; Billy Ward And His Dominoes: Star Dust.

CD2: The Cleftones: For Sentimental Reasons; The Cadillacs: The Girl I Love; Frankie Lymon And The Teenagers: I'm Not A Juvenile Delinquent; The Platters: Smoke Gets In Your Eyes; The Fleetwoods: Come Softly To Me; The Dubs: Chapel Of Dreams; The Tune Weavers: Happy, Happy Birthday Baby; Huey "Piano" Smith & The Clowns: Don't You Just Know It; Thurston Harris & The Sharps: Little Bitty Pretty One; The Quin-Tones: Down The Aisle Of Love; Jimmy Charles & The Revelettes: A Million To One; Rochell & The Candles With Johnny Wyatt: Once Upon A Time; The Rivieras: Moonlight Cocktails; Billy Ward And His Dominoes: Deep Purple; Danny & The Juniors: At The Hop; The Diamonds: Little Darlin'; The Skyliners: Lonely Way; Phil Phillips With The Twilights: Sea Of Love; Little Caesar & The Romans: Those Oldies But Goodies (Remind Me Of You); The Earls: I Believe

CD3: The Majors: A Wonderful Dream; Nathaniel Mayer And The Fabulous Twilights: Village Of Love; The Crests: The Angels Listened In; The Skyliners: It Happened Today; The Duprees: My Own True Love; Dion: Love Came To Me; The Belmonts: Come On Little Angel; The Drifters: I Count The Tears; The Sensations: Let Me In; The Corsairs: Smoky Places; The Jive Five Featuring Eugene Pitt: I'm A Happy Man; The Drifters: This Magic Moment; Rosie & The Originals: Angel Baby; Barry Mann: Who Put The Bomp (In The Bomp, Bomp, Bomp); The Tokens: The Lion Sleeps Tonight; Kathy Young & The Innocents: A Thousand Stars; The Miracles: You've Really Got A Hold On Me; The Shirelles: Will You Love Me Tomorrow; Fireflies: You Were Mine; The Marvelettes: Forever.