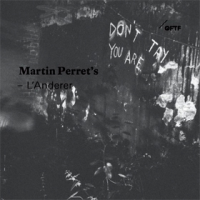 The moody and mystical Don't Try You Are is a concept album—"the musical investigation of the murder of a mysterious man in an indefinite country just after a war." The music—written by drummer Perret—is high on atmosphere and mystery, often dark and sometimes unsettling. It's not an album to encourage an outbreak of dancing, but it is a striking and highly impressive debut release.

Perret is a busy player in a range of ensembles—including the Hellmuller Trio, Objectif Lune and the trio of pianist Marie Kruttli, whose delicate Fender Rhodes is a key element here. The mystery and uncertainty of his musical investigation cross over into other areas. L'Anderer seems to be the name of both the victim the band: the enigmatic cover photos—ghostly figures in a decrepit, derelict, house—give no more clues but do add to the unsettling nature of the compositions. I played Don't Try You Are two or three times before I read the press release and found out about the concept. Left to my own devices the music came over to me as the soundtrack to a contemporary film noir, so pretty close to Perret's intentions.

Perret's compositions are brought to life by a fine sextet of players. There are passages of great beauty (the saxophone interplay between Sebastian Strinning and Elio Amberg on "Seuls Contre Tous"; the cool and seductive "Lost In Time 1") as well as moments of slow-burning psychological drama ("Killer Bees," where each musician demonstrates superb control while establishing an increasingly intense and frightening mood) and more overtly aggressive energy (the rocky "Killer Drones," with Perret's muscular drumming and Franziska Staubli's jagged guitar over Martina Berther's bass foundation).

Don't Try You Are is available as a CD, download or vinyl album. It was a pleasure to receive the vinyl format for review—sound quality is excellent, thanks to Thomas Gabriel and the cover art (designed by Fabio Parizzi with photos by Karolina Spolniewski) is a joy to behold in its full 12-inch glory.