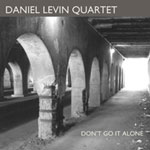 The cello may not be the first instrument you think of when it comes to improvised music, but with artists like Erik Friedlander, Vincent Courtois, and now Daniel Levin putting together daring ensembles that forge new places for their instrument, it is certainly gaining in stature. Don't Go It Alone is Levin's first recording, and is a fine example of chamber jazz, with an unusual instrumental line-up that allows for a multitude of musical spaces, from open-ended free jazz to more overtly structured tone poems.

Levin is joined by Dave Ballou on cornet, who has recorded with artists including Either/Orchestra, Orange Then Blue and Rabih Abou-Khalil's Cactus of Knowledge Group, all forward-reaching groups that have given him the opportunity to plumb the depths of everything from world music to third stream; Matt Moran on vibraphone, whose work on Ellery Eskelin's string project, Vanishing Point, gives him the perfect credentials for this one; and bassist Joe Morris, this time setting aside his guitar, providing both a clear pulse and a keen collaborative ear.

Morris, in fact, is the one most responsible for providing some semblance of groove on the recording; with a somewhat walking bass line on 'Unfortunate Situation,' he provides an anchor over which Moran creates a subtle texture; Levin and Ballou experiment with some traditional and non-traditional sounds that allow the intensity to wax and wane.

'Underground' features a stop/start motif that leads into a more free exploration; '17th Street' has an almost ambient flavour, with Moran's subtle shadings and Morris' arco providing a rich backdrop; 'In Parts' features some frantic bowing from Morris and Levin, building into a maelstrom of sound; and 'Interlude' almost approaches cool with Morris' bass line, but then Moran comes in with more angular chords that take the piece into darker territory. The CD closes with 'Bronx No. 2,' which finds each member of the group exploring different rhythmic centres, yet all the while strangely coalescing into a cogent sound.

Levin himself has a sound that ranges from subtle and understated to aggressive; with admirable technique as a performer and a compositional concept that blends structure with freewheeling exploration, he deserves to have his name added to the short list of cellists who are making a mark in improvisational music. With Don't Go It Alone he proves that seemingly disparate instruments can come together and create an evocative sound.

Visit Riti Records on the web.