By BRUCE LINDSAY
April 7, 2011
Sign in to view read count 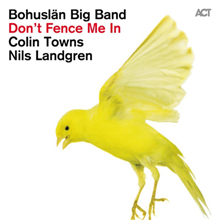 Some of the finest compositions in The Great American Songbook, one of Europe's most talented big bands and one of the best arrangers Britain has produced. Put them all together on one CD, and it doesn't disappoint. The Cole Porter songs on Don't Fence Me In are among the most familiar in popular music, but while the Bohuslän Big Band's versions, arranged by Colin Towns, are instantly recognizable they are also innovative and exciting.

Nils Landgren, the Artistic Director of Sweden's Bohuslän Big Band, is a superb trombone stylist: by turns lush and romantic, or full-blooded and funky. His voice is a thing of fragile beauty. Light, gentle, fresh and tender it's ideally suited to songs of true love, lost love and unrequited love, as well as the occasional tune about the Great Outdoors.

Towns' arrangements are inventive and stylish, bringing out the nuances of Porter's music and lyrics in ways that seem obvious yet have never arisen before. Halfway through "I Love Paris," Towns calms things down with a short piano break from the excellent Tommy Kotter that could have come from an Erik Satie composition, on "Don't Fence Me In," he adds Johan Borgström's soulful vocal as a counterpoint to Landgren's, and creates a genuinely slinky and seductive version of "Too Darn Hot."

The musicians take to the challenge of Towns' arrangements with relish. As an ensemble, this is a band with real bite and power. It's also a band packed with top class soloists—and Towns gives plenty of them the chance to shine. There are fiery saxophone solos from Ove Ingemarsson and Joakim Rolandson on "What Is This Thing Called Love," and more reflective and romantic solos such as Alberto Pinton's clarinet on "I Love Paris."

Landgren may not be an obvious choice to interpret Porter's lyrics, but his almost naïve style works wonderfully. On "I Love Paris," he truly sounds as if he is enraptured by the city, and on "I've Got You Under My Skin" he sings like a man who adores the sensation of feeling at one with his lover. On "Miss Otis Regrets," Towns' narration and Landgren's singing are rather unconvincing, but even here the arrangement and playing are terrific, with Kotter's delicate piano and a sparse but atmospheric horn section.

Recordings of Porter's songs are hardly rare, but new and innovative recordings are unusual. On Don't Fence Me In the Bohuslän Big Band, Landgren and Towns have brought a new dimension to Porter's work, creating a brightly beautiful collection of songs.

From This Moment On; Too Darn Hot; What Is This Thing Called Love; I Love Paris; Begin The Beguine; Love For Sale; Prelude To Miss Otis Regrets; Miss Otis Regrets; Don't Fence Me In; I've Got You Under My Skin; I Get A Kick Out Of You; Every Time We Say Goodbye.