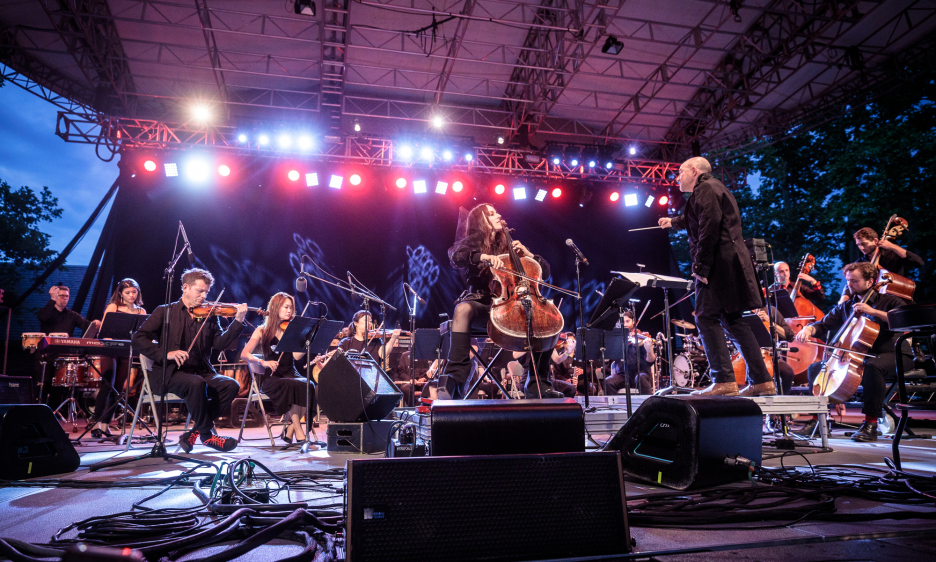 David Bowie was one of the most remarkable people I’ve ever met. His vision as an artist, his uncompromising courage to do whatever he was hearing.
&#151Donny McCaslin

New York City can't stop saying goodbye to David Bowie. And with good reason. The rock legend lived in Manhattan for more than 20 years and often spoke fondly of his adopted city. On June 9, another tribute was staged, this one at Central Park's SummerStage featuring Donny McCaslin, whose band backed Bowie on his final album, followed by a symphonic arrangement of that album by Evan Ziporyn featuring cellist Maya Beiser.

The story of the collaboration between Bowie and saxophonist Donny McCaslin has been told repeatedly in both the jazz and pop worlds. McCaslin's old boss, composer/pianist Maria Schneider (with whom Bowie had recorded a track in 2014) gave the rock legend one of McCaslin's albums. Bowie later dropped in to Manhattan's cozy 55 Bar to check out McCaslin's band and ended up hiring them for a project he was recording on the hush.

The remarkable thing about the Bowie/McCaslin collaboration—the product of which, Blackstar, was not only Bowie's final album, but one of his best—was how much Bowie used the group's sound to fit his own purposes. The singer certainly relied on the talents of numerous musicians to shape his work throughout his long career, but this was the one time he picked up an existing band and made it his own.

Unfortunately, this wasn't the band heard at Central Park. McCaslin is to be commended for how little he tried to capitalize on that collaboration, but this would have been the moment to seize it. Guitarist Ben Monder—a huge part of the Blackstar sound—was nowhere to be heard, and added to the mix was a new collaborator, singer/guitarist Jeff Taylor.

Taylor brought a decidedly different feel to the group, giving it an indie rock angle augmented by occasional reggae lilts, owing a debt to Dave Matthews with hints of Oasis melodies and occasional Red Hot Chili Peppers jamming. In other words, it reflected neither the Bowie connection (for better or worse) nor the jazz foundation upon which McCaslin has built his name. McCaslin's unaccompanied saxophone solo after the first couple of songs did help to assuage the disappointment of premature expectations, but not for long.

Before their last song—a cover of Bowie's "Look Back in Anger" from the 1978 album Lodger—McCaslin called Bowie "one of the most remarkable people I've ever met," and noted "his vision as an artist, his uncompromising courage to do whatever he was hearing." Perhaps that's what gave McCaslin the courage to bring this strangely middle-of-the-road band to what had seemed to be an evening about artistic innovation. The new band had the chops to tear through the song (sounding better than they had on the material McCaslin and Taylor had written for the group), but Taylor's vocals weighed it down with an unnecessary gruffness.

The second half of the evening redeemed the tribute with a project first presented in 2017 in Boston under the name "Ambient Orchestra." The evening had been produced by (Le) Poisson Rouge and the venue's fine resident orchestra, was on hand to ably play Ziporyn's Blackstar arrangements. In introducing cellist Beiser, Ziporyn said that "the problem was to find someone who could match David Bowie's voice, not just imitate it, and I found the perfect collaborator." His instincts were promptly proven right.

Ziporyn had arranged AC/DC, Jimi Hendrix, Led Zeppelin, Nirvana and Muddy Waters and others for Beiser's 2014 album Uncovered, with treatments that verged on the heavy-handed. But here the pair displayed an ability to be both subtle and strong. Beiser delivered the melodies—certainly long since memorized by most of the audience—with the voice of her instrument, improvising phrases and scratching and wavering in ways not meant to emulate Bowie's voice but compliment his music in the cello's own way.

Not all of the songs on Blackstar are as rich as the opening title track—at 10 minutes, an unlikely hit—and not all of the orchestrations were, either. But they were never less than propulsive. Beiser sawed away at "'Tis a Pity She's a Whore" like she was throwing down at a hoedown. "Sue (Or in a Season of Crime)"—the track for which Bowie had employed Schneider and her orchestra—was given an understated overdrive intro, whether by electronic effects or simple string dissonance was wonderfully unclear.

Zyporin didn't shy from the orchestra's voice, either. From the first notes, the strings brought out the romanticism in Bowie's opening refrain, making from it a delicate Tchaikovsky march. His arrangement of "Lazarus," the other "hit" (there were no singles released from the album but promotional videos for "Lazarus" and the title track) brought out the percussive and instrumental compliments to the melody lines so well crafted in the original. When the orchestra reached a rousing arrangement of the closing track, "I Can't Give Everything Away," the audience was fully in its embrace. Cheers broke out like at a rock show during Beiser's animated soloing.

Beiser then announced what wasn't quite encore nor finale in an arrangement of Pink Floyd's "Wish You Were Here," saying that the title held true for audience and orchestra alike. It made sense enough in a classic rock way, but Bowie doesn't, or doesn't need to, make sense in a classic rock way. They played a loving arrangement with a heartfelt sentiment, but it was an unnecessary cap on the evening. Fortunately they capped the cap with an upbeat party, giving TSOP treatment to Bowie's biggest hit (and one of only two Billboard #1s), "Let's Dance," with McCaslin joining in.

There's no lack of sentiment attached to David Bowie and his music in New York City. The town he called home even bedecked a subway station with his multiple likenesses (just blocks from the loft where he and wife Iman lived, although doubtless neither ever took the train) and which he termed a "go-go where everything tastes nice." So while a warm reception to the "classical" treatment of Bowie's music was almost a given, it was still one they earned.

The point that Bowie wrote "serious music" doesn't need to be proven. He proved it himself time and again, and if an outside source is needed, Philip Glass has already done as much with his "Bowie Symphonies" (the third of which, based on the songs from Lodger, is set to be given its premiere by the Los Angeles Philharmonic in January). Ziporyn and company weren't out to prove anything, however. They were just paying their respects with faithful arrangements, and they paid in full.