Donald Fagen and The Nighflyers at Hard Rock Live Cleveland 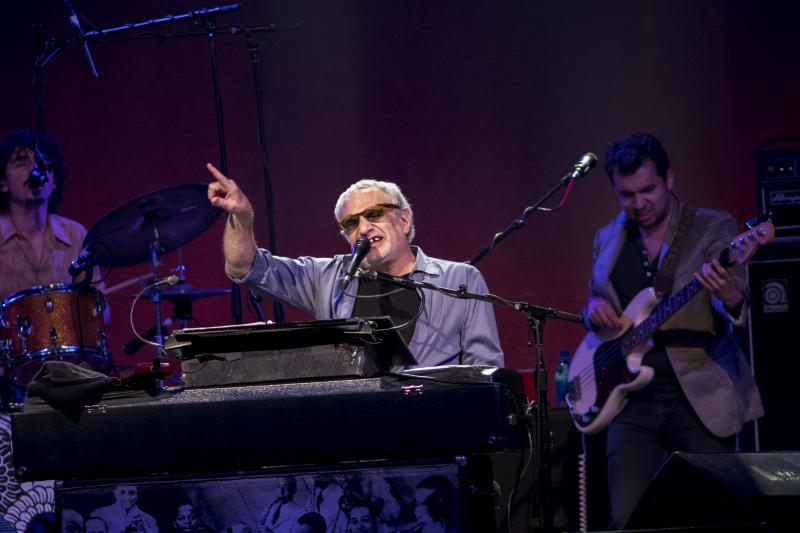 It made for quite a comparison to hear these familiar tunes renewed by this talented group of youngsters who weren’t even on the planet when the originals hit the airwaves.

Fans of Steely Dan and Donald Fagen residing in Northeast Ohio have been fortunate over the past decade or more to see their locale be a regular stop on the live tour schedule. In addition to The Dan's regular summer excursions stopping in the Cleveland area, Fagen led a brief stint in 2006 supporting his third solo album, Morph the Cat, that included a set at Playhouse Square. As part of his current twenty-four stop tour that kicked off at the top of August, Fagen once again booked a Cleveland date and made an appearance at the Hard Rock Live concert venue on a recent Friday evening.

Making for a refreshing change of pace, Fagen's modus operandi for this tour proved to be something altogether unique and unexpected. It seems that he relied upon his home environs to assemble the small cast of musicians that are supporting him on the road. The Nightflyers, taking their name from Fagen's 1982 debut set The Nightfly, are a crack team of twentysomethings from the Woodstock area. Having been a part of a scene that includes Amy Helm, Kate Pierson of the B-52s and Bill Payne of Little Feat, these guys have street credibility and clearly inspired Fagen over the course of a set that was just a bit over an hour and a half.

Drawing from his aforementioned solo debut, the band kicked off the evening with perky renditions of "Green Flower Street" and "New Frontier." After the first few bars, Fagen strutted out on stage with melodica in hand and rifled off two of the album's best numbers with spot on support including the cowbell vamp that closes out "New Frontier." Following some wry comments and salutations, he then went and sat down in front of his Fender Rhodes, which was covered in front by a vintage black and white photo of Duke Ellington and his band from the 1940s.

A rather cursory reading of "Hey Nineteen" led to a more satisfying interpretation of the Grateful Dead's "Shakedown Street," a fine introduction as well to the talents of guitarist Connor Kennedy. His Frampton-esque solo made a strong impression and Fagen wisely gave him the floor on several occasions. Also heard from was keyboard man Will Bryant, whose assemblage of various vintage rigs helped him to find just the right mix of textures and colors to support Fagen's iconic repertoire.

Since his parents used to live in Cleveland Heights, Fagen made several references that were obviously exclusive to this crowd. At one point he quipped, "You know I think about Harvey Pekar quite a lot. He was a very creative individual." This reference to the longtime jazz critic and creator of American Splendor was followed in short order by a splendid version of The Band's "Look Out Cleveland," with Kennedy taking lead vocals and all the other guys serving up some luscious backing harmonies.

Up next were a trio of Steely Dan oldies including "Kid Charlemagne," "Bad Sneakers" and "Time Out of Mind." It made for quite a comparison to hear these familiar tunes renewed by this talented group of youngsters who weren't even on the planet when the originals hit the airwaves. It's not that these updates were better, just different and all the more refreshing as a result. The same could be said about the entire evening. In placing much trust in his young colleagues, Fagen managed to produce a show that never hinted at a mere going through the motions.

The only other cut from his solo catalog, "The Weather in My Head" from Sunken Condos was a great choice for revisiting and to hear this number with the Nightflyers reinforced how great Fagen's talents are as a writer. Subsequently, a rush of Steely Dan favorites filled out the evening, although there was much to enjoy including Kennedy's work on "Dirty Work," Bryant's killer Prophet 6 foray during "Home at Last" and a slamming drum solo from Lee Falco during "Josie." Not to be overlooked, bassist Brandon Morrison locked in the tempos with precision, even if he did not step out in the solo spotlight. A later addition to the group, Zach Djanikian played guitar and saxophone and added some backing vocals, but was really not a prominent voice in the mix.

Not at all surprising, "Bodhisattva" reached incendiary proportions with Kennedy and Bryant trading licks and "Reelin' in the Years" served as the obligatory encore. Having fired up the crowd with the last few songs, Fagen and crew could have easily come out for one or two more encores. Such was not the case, but let it not be said that Fagen rests on his laurels. On the contrary, this solo tour with the Nightflyers proved to be a sagacious idea that brought out the best in Fagen and hopefully provided a resume booster to some talented gentlemen worthy of wider recognition.