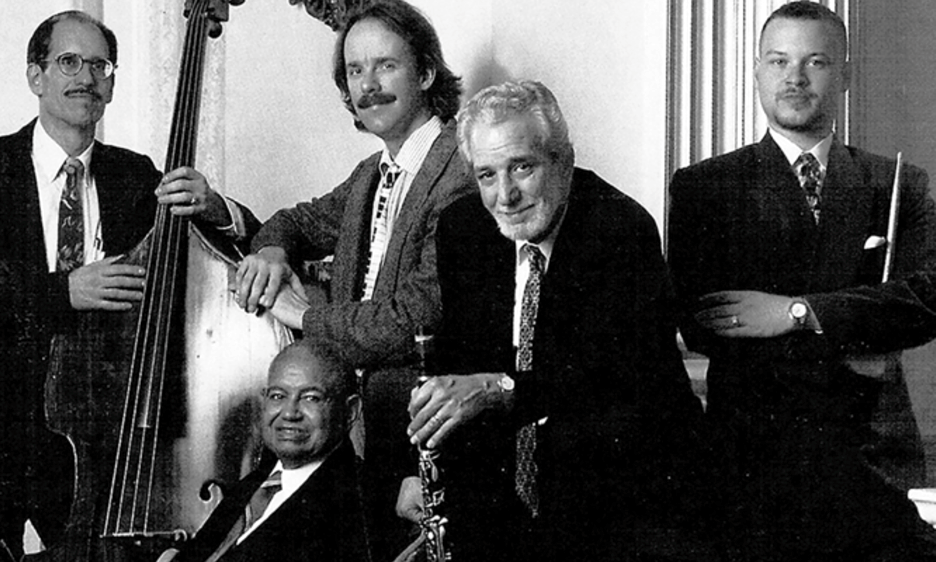 By CHARLES SUHOR
September 2, 2018
Sign in to view read count
This article first appeared in the 2016 issue of The Jazz Archivist.

My brother, Don Suhor, played clarinet and alto sax in a stunning variety of jazz contexts for over fifty-five years—almost exclusively in New Orleans. I always felt frustrated by my brother's lack of concern with legacy. He made a few recordings as a sideman, none of which displayed the range and the uniqueness of his talents. Some of his best work is preserved on tape at a few private sessions, which he was reluctant to attend. Guitarist John Eubanks once commented, "You know how hard it is to get Don into a recording studio."

His career just about defined "low profile." But as bassist Bill Huntington said, "Other musicians knew what a great player he was." Historian/clarinetist Thomas Jacobsen wrote, "He was one of the most respected musicians in the city among his peers... a musician's musician." Trombonist Al Hermann counted him "among the top three or four clarinet players of all time." Vocalist Thais Clark said, "Don Suhor, my man. Anything that I wanted to do when it came to jazz, Don knew." When Don was terminally ill late in 2002, a benefit jam session at Palm Court Cafe organized with a week's notice drew over 250 musicians and friends "We had an amazing response," said Palm Court proprietor Nina Buck. "It was packed. Don was too sick to attend, but at least he knew we did it for him."

If I had been less pious as a jazz journalist, Don might have been a more familiar name in the national jazz community. While chronicling local gigs and tidbits of information for the twice-monthly issues of Down Beat during the 1960s, I didn't want to be nepotistic, so I mentioned Don sparingly. In my 2001 book on postwar jazz in New Orleans, I placed him in context as one of the musicians who advanced modern jazz in the city. In this article I'll trace his rich background of extensive performance in Dixieland, swing, and modern jazz settings and his development of a personal style that assimilated various influences.

Born August 30, 1932, Donald John Suhor was the third in a family of five children of Anthony Suhor, an accountant, and Marie Porte Suhor, an elementary school teacher. Both were first generation Americans, raised in the Ninth Ward. They married in 1927 and settled in the upper Ninth at 1310 Bartholomew Street. Anthony was the fourth of five children of Antun Suhor, a Craotia-born seaman, and French-American Marie Hondareyte. Had Antun not died at sea at age forty-two, his family would have grown wealthy on his abundant salary as a bar pilot. Marie lived as a young girl with her French parents and two siblings in a house on Douglass Street in the lower Ninth, where they raised chickens and cows. Marie had a natural ear for music. Unable to afford a piano, her parents got permission for her to practice next door at the now-famed Steamboat House on Egania Street. Sunday living room music sessions at our home resembled a Norman Rockwell scene: Anthony struggling mightily to read sheet music on a C-melody sax as Marie played in a lilting manner commonly called "school teacher piano."

Don took up clarinet in 1944 when Marie insisted that he and the two youngest children, Jane and I, should "get some sort of musical education." I grudgingly chose piano, as did Jane. Neither of us had a taste for scales and key signatures, so we soon cried our way out of it. Don chose clarinet because he had heard Artie Shaw on the Swing Era records that our older siblings, Mary Lou and Ben, had bought, and he thought Shaw looked handsome playing the instrument.

Don took beginners' group classes at Werlein's Music Store under Johnny Wiggs, the noted Bixian cornetist and co-founder of the New Orleans Jazz Club. Don's immediate enthusiasm led to serious study with Emanuel Alessandra, oboist with the New Orleans Symphony. He was stimulated by the classical approach, even gamely reciting traditional solfeggio exercises required by the oboist. Pete Fountain also studied with Alessandra. He and Don were among those who entered a Benny Goodman search for the city's most promising young clarinetist when Goodman came to town to play with the New Orleans Symphony at Municipal Auditorium in 1947. The finalists were Don, age fourteen, and nineteen year-old Don Lasday, who later became a versatile reedman and teacher in the city. Lasday played a bluesy improvisation. Don won the Goodman trophy playing, ironically, two memorized Artie Shaw solos from Gramercy Five recordings, rendered with flawless control of feeling and inflection.

Shortly after, Don told me—no, announced—that he was going to learn how to "fake" and "jam," explaining that faking was playing a melody by ear, and jamming was "taking a ride," improvising an original solo based on a song. He dug in with gusto, woodshedding alone or playing along with jazz records. Shaw, Benny Goodman, and local great Irving Fazola were his earliest influences, followed by Buddy DeFranco. His record collection also included Hank D'Amico, Peanuts Hucko, Jimmy Noone, Barney Bigard, Arne Domnerus, and Jimmy Hamilton. He also deeply respected locals Lester Bouchon, Sharkey Bonano's clarinetist, and the ever-expressive Raymond Burke.

At Nicholls High School, 1946-1950, Don was encouraged by the gentle band director/cornetist Charlie Wagner, who once played across the street from Bix in Chicago. Wagner enjoyed talking to Don and fellow clarinetist Paul Vicari, trumpeter Jack Barratini, and other jazz-oriented students about the music and its history. (Barratini (later, Jay Barry) led a jazz and dance combo on weekends with Vicari at a popular neighborhood bar, the Harmony Inn on North Claiborne and Piety. The Harmony, though segregated for white patrons only, featured traditional black bands over the years led by trumpeters Willie Pajaud, Kid Sheik Colar, and others.)

Charlie Wagner was generously permissive in relation to jazz. During marching band practice for football season, Don would occasionally improvise contrapuntally during the trio sections of marches, with Wagner's tacit approval. While the dance band was on break at school events, Wagner sometimes played piano with a breakout group of students who could fake and jam.

Don led a combo at weekend dances at teen venues like the Woodmen of the World (W.O.W.) Hall on Almonaster Street (a block from Luthjen's). They played Hit Parade favorites, popular standards, and songs from the Dixieland repertoire. Don also taught them some infrequently heard jazz tunes like Art Hodes' mournful blues, "Clark and Randolph" (named for a street corner in Chicago noted as a jazz club site) and the Bob Crosby Bobcats' novelty song, "Don't Call me Boy," engagingly sung by trumpeter Paul Emenes. I plugged Don's group in 1948 as a guest on Roger Wolfe's popular weekly "Dixieland Jazz" radio show on WDSU.

Don also gigged with solid young Irish Channel musicians like trumpeter Al McCrossen, tenor saxophonist/pianist Johnny McGhee, and the Assunto brothers. As with the Nicholls players, the level of talent was uneven. Don told me about an amiable channel guitarist named "Toots," who knew only a handful of songs but would strum away, casually playing wrong chords, often utterly lost. Don's solution on tunes like "Sweet Georgia Brown" was to set a challenge for himself. During his jazz chorus he would visualize the song's structure and chord sequences, regardless of the chaotic background din, and just stop playing when his chorus ended.

At age sixteen, Don sat in with Sharkey Bonano's band at one of their Sunday sessions in a side ballroom of Municipal Auditorium. He worked steadily on weekends with veteran trumpeter Stuart Bergen ("Red Hott") and frequently with alto saxophonist Joe Helwick and trumpeter Dutch Andrus. Bergen was especially fond of "Lil' Donnie" and brought him to jam at New Orleans Jazz Club meetings.

I was three years Don's junior, the awed kid brother, caught up in the local postwar jazz revival, proud of my collection of 78s of Bunk, Louis, Bix, the Bobcats, Wild Bill, and others. On Saturdays I would hang out at Harvey and Orin Blackstone's New Orleans Record Shop on Baronne Street near Perdido. I talked Don into playing along with records in a booth, but he was reticent about sitting in at the occasional Saturday jam sessions in the back room with Johnny Wiggs, newcomer George Girard, Raymond Burke, drummers Freddie King and Gilbert Erskine, and others.

Don was a natural teacher. Neither he nor I knew the meaning of the word "mentor," but over our teen years he mentored me in informal talks about jazz genres, styles, and history, with regular reference to local players and our expanding record collection. Some of his insights might have come from talks with Charlie Wagner and magazines like Metronome, Down Beat, and Band Leaders, and from my collection, Jazz Record and Record Changer. But his understanding of the music grew in a large part from his inquiring mind and keen intuitions.

Don persuaded me to accompany his front-room solo jams. At first I used coat-hanger sticks, cardboard boxes, a pot cover cymbal, and a small stepstool for a woodblock. I was strongly attracted to Baby Dodds and George Wettling, who were sensitive colorists as well as great timekeepers. Later on, I bought a second-hand drum set from Phil Zito. Don learned dozens of standard tunes from Goodman and Shaw's combo records. Inspired by Goodman, he tested himself—and me—with breakneck tempos on tunes like "The World is Waiting for the Sunrise."

Don took up alto sax in his late high school years and was soon playing in local dance bands. He chose alto sax rather than tenor because he liked the bright sound of the instrument in big band sax sections, especially Les Robinson with Artie Shaw. But he became enamored of a radically different sound when he heard the dauntingly complex early recordings of Lee Konitz and the Lennie Tristano school. Jamming in our living room, I could almost see the wheels of his mind turning as he wove out long, complex solo lines. On clarinet, he raised the bar by playing tunes like "I've Got Rhythm" in the standard key then moving up a half step to improvise in every key.

Self-taught on piano, Don learned chord progressions and played energetic solos. Session players in the Quarter welcomed his backup because of his attention to well-voiced chords and hip comping. Alto saxophonist Mouse Bonati and trumpeter Mike Serpas were also excellent accompanists. Not being trained as keyboard technicians, they refrained from overly busy pianistics, concentrating on spare, laid-back comping.

College Years, the Quarter, and the Army

Don enrolled in the Loyola Music School in 1950. As a freshman he played third alto in the big band amid veteran musicians. Veterans, literally. Many were Swing Era ex-servicemen studying under the GI Bill of Rights. The band, directed by John Whitlock, was a non-credit activity but it carried a modest scholarship and was officially sanctioned by the administration. Not that the administration was ahead of the curve in jazz education; the band was the heart of a student recruitment and campus entertainment troupe called "Campus Capers"—a lighthearted name that signaled a less than serious musical intent.