By JOHN KELMAN
December 22, 2014
Sign in to view read count
For this column I step away from my avoidance of personalization because its roots and intent are, indeed, very, very personal.

The germination of this column began as the result of two coinciding events. First, after months of relative inactivity due to a health matter that, while thankfully non-life threatening and treatable, could take several more months to get me back to my usual breakneck speed and has slowed my writing to a crawl, I began to feel like I needed to do something to keep promoting music that moved me, but in ways that required less physical and mental energy.

The second—and much happier—event was acquiring the best sound system I have ever owned (and will likely ever own) recently, as part of an upcoming home renovation. Still waiting on the Tetra 111 Subwoofers to complete my 333 stacks (combined with the renowned Ottawa company's 222 bookshelves), Oppo BDP-105D multimedia player and Leema Tucana II integrated amplifier, the sound is still so many orders of magnitude beyond what I had that I have truly begun hearing albums as if for the first time...the increase in fine detail, depth, breadth and transparency has truly been that significant.

And so, as I began pulling out albums I'd not heard in weeks ... months ... years ... decades ... I thought: why not share these records with others who may or may not know them? Focusing largely on reviewing new releases, I've never had the chance to pay respect to so many older recordings that have shaped my ears and my love of music.

Thus, this Rediscovery column. But this isn't just about me. I am hoping that as you read what is intended to be a daily column—with relatively short synopses that, not exactly reviews, intend to bring these album to your attention—you'll feel inclined or even compelled to chime in with your own thoughts. My thoughts will provide but one part of the picture; your opinions will be just as important. And while I will be spreading the news of this column to my various social media portals, bulletin boards and email lists, I hope that, rather than posting there, you'll post here, at All About Jazz. Yes, you must sign into DISQUS, AAJ's comments software, but if you have a Facebook, Twitter or Google account, you can sign in with one of them—and typically only once at that.

So, here we go with our first Rediscovery, though I will post the first four that I placed on social media as a trial run this past week in the coming days. I hope you'll join me in discussing and sharing what have been important recordings to me—mostly jazz, but be warned to expect some extracurricular content as well, because my tastes have been shaped by more than just jazz and I suspect that's true for many of you as well. So let's talk about it! 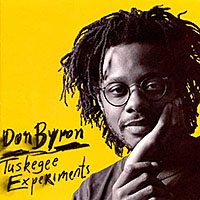 I'd been hearing then-solely clarinetist Don Byron's name already, but this was the first of his records that I bought, and what an introduction. Being a guitarist, I have to admit that the big draw for me, beyond Byron, was the participation of Bill Frisell on four of its nine largely original tracks (and comprising more than half the album's one-hour run time). To this day the guitarist's extended solo on Byron's "Next Love"—one of his most moving compositions ever—remains one of my favorite: perfection in tone, construction, choice and sheer emotion.

But this is truly Byron's record and—in a career that has seen him recently move away from clarinet to include saxophone—still one of his absolute best. The record was inspired by two events in American history that, in their sheer inhumanity, resonate particularly with current race relation issues and demonstrate how little has truly changed. First, the forty-year study of syphilis in Black men, where more than half of the 400-strong study group had the disease (the rest did not) and were left untreated simply to observe its long-term consequences. The second, as Byron describes in his liners, "[In] the Tuskegee aviation experiment, over-qualified and under-compensated Black men endured unnecessary indignities simply to 'prove' they could be trusted to fly military aircraft."

But subject matter aside—though it is addressed directly through poet Sadiq's spoken word on "Tuskegee Experiment"—this is an album that, in addition to Byron's exceptional writing, includes one cover each from Duke Ellington and Robert Schumann. Byron's a cappella solo, "Waltz for Ellen," opens the album on a particularly poignant note and asserts him as a clarinetist of importance who would go on to even broader purviews and greater acclaim.

It's a record that not only remains musically relevant today, nearly 23 years later, but conceptually as well. And Byron's playing throughout is as passionate as the subject matter demands.