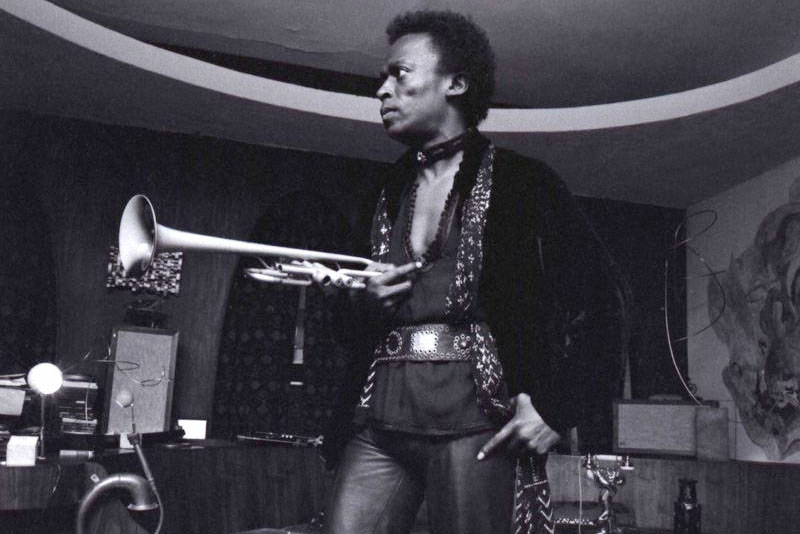 By MELANIE FUTORIAN
March 21, 2012
Sign in to view read count

People of Africa and of African descent have a certain indigenous thing that lets us say this in our music, but if you travel the world, you will find out that there are a lot of other people out there that can play our music.

[Editor's Note: Cymbalism is an All About Jazz column featuring excerpts from an upcoming autobiography on the late, great percussionist Don Alias, co-written by Melanie Futorian, his companion for the last seven years of his life. This installment covers Alias' work on trumpeter Miles Davis' iconic Bitches Brew (Columbia, 1970)]

It was [drummer] Tony Williams who actually called me for that unforgettable Bitches Brew session. Man, when I walked into the studio and I saw the Bitches Brew personnel I knew it was going to be amazing. There was a percussionist friend of mine,Jumma Santos whom I had gotten on the gig with Nina Simone, whose name was really Jimmy Riley. He just bogarted himself onto the session.

Jack DeJohnette and Lenny White were on drums, Dave Holland and Harvey Brooks on bass,Bennie Maupin on clarinet, John McLaughlin on guitar andWayne Shorter on sax. My good friend, Chick Corea, played electric piano with Joe Zawinul and Larry Young. I knew from the first note that it was going to change musical history and everyone's concept of Miles.

Everyone loved Miles' ballads, like "Funny Valentine." Oh, he played so pretty on those, but here comes Bitches Brew, a potpourri of conjured-up rhythms, sounds, textures and different electronics. Thank God Miles wanted to use percussion.

The Bitches Brew session lasted three days, starting around ten in the morning. I ended up playing regular drums on the session for "Miles Runs The Voodoo Down." I'd been practicing a drum rhythm that Gene Perla had taught me while I was living with him. Chris Hills, a great bassist who was friends with Gene, had taught him that rhythm. It was a New Orleans funky kind of rock and roll beat. I'd been practicing this beat and had it down.

Miles called "Miles Runs the Voodoo Down," but the drummers weren't getting it, which caused a little ruffling of nerves in the studio. Miles called it again and on the third try he stopped it. Until then, every tune had been a first take. Everyone got a little nervous and I was sitting there saying to myself that Gene's rhythm I had been practicing would be just perfect for the tune. I took it upon myself to say, "Wait a minute Miles. I got a rhythm for you that would be great for this tune."

People started shuffling, looking around at each other waiting to see how Miles would react to this new guy stopping the session. Miles just looked over and directed me to the drum tier telling me to lay out the rhythm. When I finished playing he just said, "Show Jack," so I started to show Jack DeJohnette. It was really just one of those simple rhythms, you know, but you had to have some kind of weird coordination to get it right. Jack couldn't get it, so Miles looked over at me and said, "Stay there." I sat behind the drum set and played rhythm on "Miles Runs The Voodoo Down," a tune on what became a gold album. Oh boy, oh boy! I was in seventh heaven, ladies and gentlemen, seventh heaven.

After the Bitches Brew session, I continued touring and recording with Nina and she put me on salary. At that time to be put on salary was considered a kind of feather in your hat because it meant that you still got paid even when you weren't working. Then it happened in '69. I got the call to play with Miles Davis. Needless to say, all hell broke loose with Nina. Of course all kinds of feelings surfaced within me because I was extremely loyal to her and respected Nina for teaching me so much. Then again, it was Miles Davis.

Nina called up Miles and cursed him for stealing her drummer. I lost contact with her for quite some time because she wouldn't have anything to do with me. I had been her musical director as well, but I think that deep down she understood why I went with Miles. She was mad though. Mad to the point that Miles would call me up and rasp, "Don, get that bitch off my back."

I went to Miles' first rehearsal with a drum set because I thought he had hired me to play drums after that Bitches Brew session. When I walked in lugging my drum set, Miles looked at me and said."Don, what are you doing with that? I can't find anyone to play percussion like you, and I already got two drummers. I'm teaming you with another percussionist."

It was M'tume, the nephew of the great saxophonist Jimmy Heath. The drummer was Leon "Ndugu" Chancler, who changed his name to N'dugu. M'tume and N'dugu started to hang out a lot together and between the two of them, developed a kind of racial arrogance. Right away, the drums became a major problem. N'dugu had brought along a Tony William's kind of set; a really small eighteen-inch bass drum. Miles was into his Buddy Miles sound and was always complaining to N'dugu, trying to get him to take the head off the bass drum and to take off his rings and watch. N'dugu's hair was braided and Miles would say, "Play like your braided hair," because back then, if your hair was braided, you were supposedly really Black.

M'tume just didn't draw from Afro- Cuban or Latino roots in percussion, though he had his own unique sound. Miles wanted both M'tume's sound and mine in his music, so I tried to compliment M'tume's music with my Afro- Cuban roots, but it was sometimes difficult to make the sounds compatible. I really wanted it to work, but it was hard because he had some sort of challenge going on with me. If I mentioned that I was going to play three conga drums, he would arrogantly tell me that was what he was going to do.

During that time, I played conga drums without any small percussion instruments aside from the occasional cowbell, so M'tume and I were really trying to make our conga sounds merge. Later on Miles had Airto Moreira, who was one of those percussionists; along with Nana Vasconcelos,who was well-schooled in Brazilian hand percussion. They really changed the course of fusion by introducing new textures and sounds to percussion.

On parts of Live/Evil (Columbia, 1971) he used Airto, and I have to say that he was the one who showed hand drummers like me about the small hand percussion and textures. I had shied away from smaller percussion instruments for a long time because I didn't want to deal with it. I was a conga player. For the time being however, M'tume and I were really concentrating on congas. As well, M'tume and N'dugu were really concentrating on being as African as an American could be.