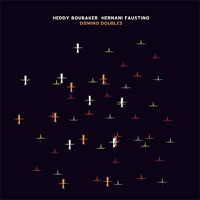 Saxophonist Heddy Boubaker and bassist Hernani Faustino have more in common than their love for improvised music. Both began their musical journeys playing in rock bands, before harkening to the call of free music.

Boubaker was born in Marseilles in 1963 and began what he calls experimenting with music in 1977. First came rock and then punk, before he put his guitar aside and picked up alto and bass saxophones. His muse, now improvised music, is a perfect fit for his manifestations, with an uncanny ability to fathom the unknown and find the unseen cord. His sense of timing and invention, and his ability to probe musical depths make for an eloquent aesthetic.

Faustino moved away from the alternative rock scene in Portugal to teach himself the bass and find his nook in avant-garde jazz. His reputation has seen him forge alliances with artists including Taylor Ho Bynum, John Butcher and Federico Ughi. And now comes his meeting with Boubaker in the aptly heady kinship of Domino Doubles.

Freedom offers space, either to be lost in or to find its centrifugal force. Boubaker and Faustino spar, converge, converse and soliloquize with a sense of perception and adventure that makes listening to them a treat. The force is with them.

The bass strings flutter, the saxophone is tongue-slapped and then torqued with eerie notes as "Circus at Midnight" opens. The atmosphere is gradually depth charged, the rumble of the bass met with fibrillating saxophone lines. Faustino and Boubaker find common terrain in criss-crossing patterns before they draw back and let an eloquent calm descend. The parts make for a compact whole.

Boubaker finds a melody on "Changing a Light Bulb" that he bends into various shapes. He cuts deep, he screeches, he twitters lightly, his notes now like dancing specks of sunlight. Faustino weaves in and out of alto saxophone lines and then notches it up with fevered bowing as Boubaker scuttles into the fervor. The momentum stills and the notes of the horn glide in to the temperate pulse of the bass. The dynamics are striking.

Boubaker and Faustino are versatile and effective as they take improvisation to impressive highs.

Circus at Midnight; Rust Dust; Slow Corrosion; Oxide; Changing a Light Bulb; Sleeping Monsters; You're Not on the Guest List; Don't Worry About Your Payment.