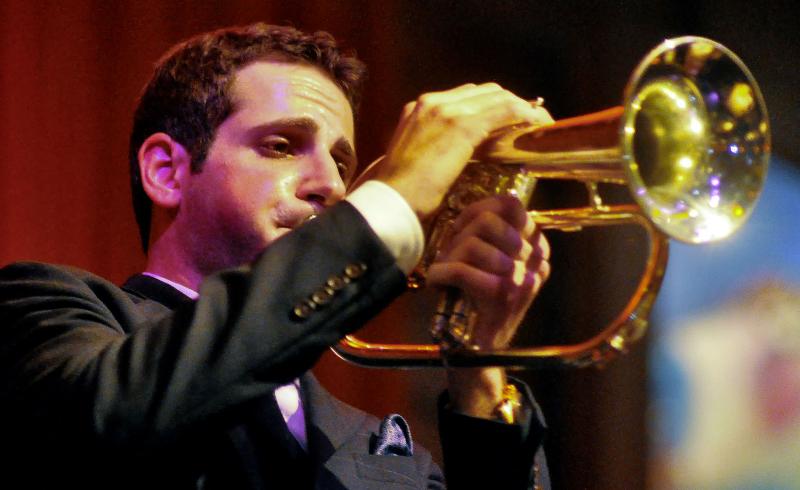 Trumpeter Dominick Farinacci brought his New York-based sextet to the Douglas Beach House to give the nearly packed house a special treat. His band was Kris Bowers on piano, Yasushi Nakamura on bass, Greg Wyser-Pratte on drums, Keita Ogawa on percussion and Christian Tamburr on vibraphone. The afternoon, and on into the evening, consisted of pieces from his albums Lovers, Tales and Dances (Koch, 2009), Dawn of Goodbye (E1 Entertainment, 2011) and others not yet recorded. After the concert had progressed and at the interim between two pieces, Farinacci proclaimed, "This is the coolest place I've ever played."

The concert was split into two distinctly different sets. An old adage in jazz states that the second set is almost always better than the first, and it held true for this sextet. During the first set, the music felt too constrained, with too much of an intense focus on precisely the exact notes and the exact timing—which is not bad but can, as in this case, be overdone. The sextet did an exquisite job but through many of the songs of that first set, the heart of the music was largely missing.

As the second set opened, it was clear that the band had warmed up, found their stride and loosened up right from the top. Opening with Farinacci 's "Vision," the bass held the melody while the trumpeter blew a smooth horn over it. Bowers burrowed down into his grand piano and let go, giving the piano a more dynamic feel than anywhere during the first set. As the piece developed, the atmosphere slowed into a quieter mood and that's when Farinacci picked up his flugelhorn and took over with a punchy series that carried the tune through to the finish with an intricate flurry. As jazz fans know, after a soloist concludes the audience traditionally applauds. However, during "Vision" the audience let go with sustained applause on three separate occasions, not because of a soloist or a featured artist, but simply because the music stirred them.

Thus the stage was set and Faranacci's sextet soared through the second set. In the third number, vibraphonist Christian Tamburr took "Body and Soul" all the way from the fury of the piece to some smooth, delicate work across the bars. The contrast between these two modes of playing made the tune stand out above all of the others in that set, and the audience's applause during that song was heartfelt.

Not only did Farinacci draw the necessary power that a piece commanded from his band members, he inspired a rare delicacy from both his drummer Wyser-Pratte and master percussionist Ogawa. This was exemplified in the Bulgarian number titled "Erghen Diado," with its percussive opening bars on Ogawa's bongos, followed by Bowers plucking the piano's strings and with his other hand playing the keys, while delicate drums flowed in under Nakamura's bass, and Farinacci came through with a mean flugelhorn carrying the melody. The unity between the bass, the drums and the percussion created a solid foundation to this fine Bulgarian tune.

That concluded the second set, but the audience, almost all at the same moment, rose to their feet with rousing applause and shouts of hearty approval with "More, more, more," coming from everywhere. As the sun set over the Pacific Ocean just outside the Douglas Beach House, Farinacci blew his delicate and mellow encore, "Smile," to a highly appreciative audience.