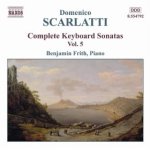 Pianist Benjamin Frith was born in South Yorkshire and from an early age, he studied with Fanny Waterman. At 14 he won the National Concerto Competition, followed by the Mozart Memorial Prize, the award for Young Concert Artists. His international career was further enhanced winning a Gold Medal at the 1989 Arthur Rubinstein Piano Competition in Israel. Naxos tagged Frith for the fifth installment of Scarlatti's Complete Keyboard Sonatas.

Unlikely as it may sound, American Ragtime composer Scott Joplin shares several artistic characteristics in common with the Italian Baroque composer Domenico Scarlatti. Both composed in multiple musical idioms, yet are best known for their keyboard composing. Within that idiom, both composers specialized in short pieces, or miniatures, which have typically been used as practice exercises. For those familiar with Joplin but not Scarlatti, these similarities may serve as a segue into the great Baroque composer's keyboard repertoire.

Englishman Frith approaches Scarlatti from a slightly more romantic angle than previous performers in this series. While on the romantic side, he does not make it into the frank romantic territory of Horowitz or the almost enigmatic post- modernism of Ivo Pogorelich. Frith lightly brushes on his romantic shades, never obscuring the Baroque pastels of the sonatas. This is best illustrated on the slower pieces such as the Sonata in B Flat Major, "K.266," which has a slightly melancholy lullaby temperament as does the Sonata in A Major, "K.536."

In earlier entries in this series, these characteristics have been best shown in the slower minor-key compositions. Frith's minor-key performances, such as the Sonata in G Minor, "K.546" and the Sonata in B Minor, "K.227" have less a lullaby quality and more a contemplative one. Solid and straightforward, Frith's Scarlatti is well informed and beautifully colored.