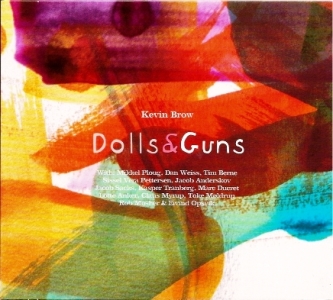 Drummer/composer Kevin Brow is a forward thinker, his compositional acuity and scintillating technique in clear evidence on his debut and sophomore releases—Kopter (2008) and Fire Sink (2011), both on Fresh Sound New Talent—modern works as intellectual as they are risk taking. If these weren't persuasive enough, then Dolls and Guns nails the point home all the more emphatically in one of the year's more intriguing recordings.

The project consists of original music performed with thirteen musicians in solo and duo settings. More focused on composition than improvisation, the fifteen pieces cover an assortment of imaginative and unusual formats that further expose the leader's gravity as a percussionist and a conceptualist, from Brow's explosive solo explorations in "Sometimes My Thoughts Also Sound Like This" and "Tilbage til 2005," where he manipulates his kit to create melodic syncopations, to the primordial tale of "An Ancient Sport," where a tribal rhythmic pattern accents the angelic voicing of multitalented singer/instrumentalist Sissel Vera Pettersen.

While the list of talent contributing to this project is impressive, the continuity between each artist and performance is even more striking, such as the gritty bar room vibe of "Green Pants," with guitarist Marc Ducret, or the amped-up backbeat juxtaposed against Tim Berne's guttural saxophone lines on Brain Washing." The dialog between Brow's demonstrative traps and Jacob Anderskov's sweeping pianistic runs in "The Key of Water" is visceral and inextricably linked, as each anticipates the other's move to become one.

But the testament of Brow's compositional prowess is one that accentuates others even when he's not performing with them. The stirring "Devils Pulpit" is a progressive string chamber movement performed by violist Claus Myrup and cellist Toke Møldrup, while "Green Tea" is a meditative solo piece for pianist Jacob Sacks. In each case, Brow's unique voice--- whether as an exemplary drummer or empathetic writer—resonates loud and clear.