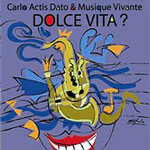 Carlo Actis Dato is always looking for the unusual. As he travels across the world, he absorbs the sounds of the various countries and brings them into his compositions. But Actis Dato does not let it rest there. When he writes, he has a certain configuration in mind, which could range from a solo performance to a big band. In the case of this two-disc release, it's a new quintet—the second one in his canon after the Actis Band.

There are political overtones on the first disc. Actis Dato is not one to shy away from his beliefs. "Abu Ammar is dedicated to Yasser Arafat. Another, "Chiapas, poses this question: "Will the fine day when the natives get back their right to exist ever come? Even as he goes into this stream, he keeps his compositional flair and melodic consciousness in his grasp. The second CD pays attention to various rhythms like the bayon, tango and zouk. With the quintet locked into every mood, the set makes for two hours of absorbing listening.

Macedonia is a land of several cultures, and Actis Dato pays tribute to that fact on "Makedonia. He plays the baritone saxophone with an assuring command, using the deep tonality for counterpoint and melody. He is not contained within those spheres, breaking loose in a molten essay of notes. Melody, however, is the underlying motif from which the musicians zoom into the stratosphere (which they keep visiting).

The music is inviting and deep, full of sinew yet pliant. It all comes to a head through a conversation between the horns that emphasises the melody, before extending into complex, yet distinct interplay. The band looks for the sweet life in "Duchi Di Braganca, named after a town in the northeast of Portugal. The blues cry out and folk music bows in. The beat sways sultrily and beckons Gianpiero Malfatto on trombone, his thick curls and smears countenanced by the sharp lines of Enrico Negro's trumpet.

The symmetrical lines of the horns opening "Rulli Amari do not presage what is soon going to transpire. The mood shifts constantly. Dance rhythms come in and cool off into softly shaded lines, only to be swept aside by the leader's freewheeling saxophone. He cuts the groove deep and hard with the passion that has become his hallmark. A marching beat and it's time to tango on "Tango del Sur. Yes, that's an unusual opening, but the beat goes on as the long lines of the tango glide on top. The band does not tread a defined path. The musicians soon scamper into freer plains, casting unusual patterns in a whorl of colours to create a stunning tapestry.

The album is a real winner!