Horace Silver: Doin' The Thing - At The Village Gate

By HRAYR ATTARIAN
October 9, 2006
Sign in to view read count 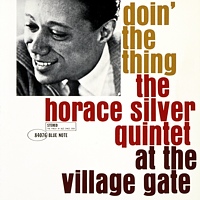 Calling any of Horace Silver's Blue Note recordings outstanding is almost redundant. One, however, is especially unique, not only because of its quality, but because it is the only live recording of his most famous quintet. Although it was recorded 45 years ago, this CD has the power to transport one back in time to the smoky room at Village Gate where one feels the raw energy of the live performance.

The music is quintessential hard bop with the airy, light tone of Blue Mitchell's trumpet perfectly complementing the earthy tones of Junior Cook's tenor sax. When their respective improvised solos succeed each other, the musical concept and logic is not broken, but one instrument takes on exactly where the other leaves off. When they trade choruses, the musical conversation is perfectly harmonious. The piano is central to every piece, and the leader's complex and bluesy choruses are anchored to the main musical theme by the impeccable timing of the bass and the drums. There are occasional and very enjoyable propulsive drum solos as well.

The two highlights of the album are the first track and the title track, but all six pieces are musical gems. This RVG remaster has two bonus cuts not present on the original LP, but they were present on the older CD release as well. The new remastering, however, has greatly improved the sound.

In conclusion, this is a great 1960s hard bop date by Horace Silver's great quintet, endowed with a new 21st Century sound. It is also quite historic because it is the only live recording by this group. No wonder Len Lyons named it one of the 101 best jazz albums in his book of the same name.

Filthy McNasty; Doin' The Thing; Kiss Me Right; The Gringo/Cool Eyes (theme); It Ain't S'posed to Be Like That; Cool Eyes (full version).