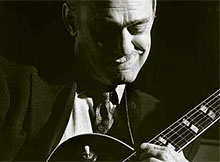 Does anybody here remember Joe? That's the question I asked myself in May of 1994 when I learned that my hero had died. As the television show Entertainment Tonight rolled the closing credits one evening, they noted that the legendary jazz guitarist Joe Pass had passed away, while a brief clip from one of his live performances closed the show. I doubt that Mary Hart knew the magnitude of the words she read, but few of the ET viewers probably took note either.

It didn't come as a complete surprise. A couple of months earlier while honeymooning in San Antonio, I learned that Joe was appearing at the Majestic Theater in town, as part of a "Guitar Summit," a concert of four guitarists of varying styles. When we arrived, I was disappointed to find that Joe had become ill and would not be able to make that evening's performance.

On the day I learned of his death, I expected to see headlines in the papers, on the news, in magazines, and on the radio. While such testimonials may have existed, they were not the prevailing stories of the day. I wanted to shout it from the rooftops. I felt as though Joe deserved a better send-off, but Joe expected nothing greater. He poked fun at today's guitarists, those who believe fingers of lightning are the only prerequisites for greatness, then quipped, "Oh well, I guess times change." He was content to play out his years displaying his unique style of plucking out the standards of jazz, intertwining chords and solos, but always remaining true to the melody. His legacy is in his music, as his Virtuoso album is required study for any serious student of jazz guitar.

I was fortunate enough to have seen him in concert 2 years prior to his death. It was a miserably rainy, cold night, but I braved the elements without reservation, slipping into the movie theater turned music club in Baton Rouge, LA known as the Varsity. I grabbed a seat at the back bar, as the event was standing room only. I sat in absolute astonishment for over an hour at a stage exhibiting only a man, a chair, an amplifier, and a guitar. Joe Pass was no ordinary guitarist. He was a pioneer—a man who defined a style of solo jazz guitar before anyone could comprehend this instrument as a featured showpiece. He then went on to perfect that style.

A funny thing happened between music sets. It seems that about half of the audience attended this concert in search of inspiration, in hopes of improving their craft, (as many were musicians themselves), out of reverence to a legend, or in appreciation of jazz guitar performed at its highest level. The other half apparently came because it was the "hippest" thing in town on this evening, and they wanted to be part of the scene. Such motivation was not compelling enough to keep them around for another set, however.

So I nestled into a front row seat during the break. I suppose my disbelief drove me to get a closer look, the way a magician's audience searches for trap doors, transparent strings, or cards up the sleeve. To my delight, Joe approached the stage a second time soliciting requests from the audience. I shouted "On Green Dolphin Street," a standard from his greatest hits album, and he obliged. There were no tricks involved, simply a technique and artistry that amazed the connoisseurs who remained.

I felt a sense of melancholy as I left the club that night. I couldn't help but think that somewhere tonight there were tens of thousands of fans applauding Madonna as she lip-synched her way across the stage in a stadium normally reserved for sporting events. I couldn't understand why only a couple hundred people could appreciate the beauty of this performance the way I did. Joe certainly knew.

You see, Joe Pass had joked during the performance how the level of commercial success his records achieved paled in comparison to the level of critical acclaim his music enjoyed. He had lived the lesson that I would learn that night and would subsequently have reinforced many times—Artistic success is not a measure of popularity or sales or recognition. It is achieved from within, and when others see the brilliance of a true artist's efforts, the rewards while appreciated, are incidental and never a part of the creative process.

In 1986, I was amazed by the brilliance of Stanley Jordan, a man who shattered the paradigms of guitar technique with his "tapping" method. I was equally appalled by the reaction of a couple of members of the audience to local Phil deGruy, the amazing opening act at Tipitina's in New Orleans on that night in October, 1986. As he played intricate tunes on his "Guitarp" (a guitar/harp hybrid of an instrument), sporadic shouts of "We want Stanley" could be heard in the audience near the end of his set. I knew Phil deserved better on this night, yet he was never flustered. He continued to display his unique talents, as he lost himself in his music, tuning out those few half-wits. He graciously smiled after each number, acknowledging the 99% of the audience that expressed their rousing appreciation of his mastery of the instrument.

Perhaps the display of dedication to musical integrity in the absence of commercial success is not more prevalent in any city than in my native New Orleans. An environment exists there that breeds musical brilliance in great numbers, and dooms these talents to oblivion, unless they take their performance elsewhere. Dozens have left because they failed to fill seedy night clubs for a two drink minimum, only to return with the "Crescent City's Own" label, as their newfound acclaim helps them fill auditoriums in the town that once doomed them to almost certain obscurity. Of course, many great musicians in New Orleans and elsewhere do not thrive on commercial success, content to wallow in relative obscurity. Still, they pour out their emotions in their music for anyone willing to listen, no matter the numbers.

They, like Joe, are my heroes as well. One common thread exists—their popularity (or lack thereof) hasn't defined their music. The effort to perfect their artistry is the engine that drives the train. They don't shun the spotlight, but they won't compromise their music to attain it. As pianist/songwriter Bob Dorough (Grammar Rock famed songwriter) once sang, "Their Boogie-Woogie can't grow stale, because it's never been for sale."

It's been 12 years since the death of Joe Pass. Every year when spring approaches, I am reminded of the anticipation of that encore performance of Joe Pass that never was, and the lack of notoriety of his subsequent passing. I believe that the best way to pay tribute to his memory is to always applaud the musician in the night club, on the street, or in the hotel bar. By dropping a dollar in the tip jar or telling the pianist his music made my evening more enjoyable, I can do more to further the interests of the music profession than I can by plunking down $20 on the latest Top 40 CD. And in post-Katrina New Orleans, support of the music community is more important than ever.

As a guitarist who occasionally sits in with various performers around the city, I have tried to remember the lessons I learned from Mr. Pass. I always try not to lose the melody in the performance, and I will always remember Joe.