Toots Thielemans: Do Not Leave Me 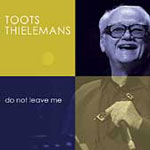 That sound! That sound, which if you are old enough, you can still remember from the first time you heard it on Paul Simon's Still Crazy After All These Years. The sound, and the man behind it, is the direct musical expression of this phrase from Thielemans' website: "I feel best in that little space between a smile and a tear." That space is where the romantic, bluesy, and utterly enchanting Thielemans resides. He perennially wins awards for "Best Instrumentalist for Miscellaneous Instruments, but as Clifford Brown said to him, "Toots, the way you play the harmonica they should not call it a miscellaneous instrument.

How many other jazz musicians can be identified by one name? To hear him is to love him, or at least his music, but the reality is that they are one and the same. Do Not Leave Me is a wonderful example of the rapport that Thielemans has built with his fans in general and this live audience in particular. On the last two tracks, Thielemans plays guitar (not badly at all!), and on "Bluesette (which he wrote, and is "his song") he whistles and plays guitar in unison, which he is famous for and, apparently uncoached, the audience whistles along with him.

In talking about the formation of this touring band, Thielemans says, "From the first note, I felt something was happening. We were not playing anything new or revolutionary—just good old reliable standards and all shades of blues.... This particular band does seem to have that special something. Pianist Fred Hersch is a very sensitive player, while bassist Marc Johnson and drummer Joey Baron show that they can turn on a dime, kicking it up and bringing it down. The music is very dynamic and dramatic, full of pathos one moment then swinging like crazy the next. Thielemans is obviously the leader, but he gives his bandmates plenty of room to play.

He refers to "Do Not Leave Me as the "ultimate love song (read the rest here), quoting the words, "just let me be the shadow of your hand ... the shadow of your dog ... Do not leave me," and saying that he tries to play the words of Jacques Brel, not just the notes of the melody, as many other great players like Lester Young and Ben Webster have said should be done.

The musical pinnacle of the show is a twenty-minute version of "Blue'N Green." The first half is given over to an ethereal introduction, with only the slightest hint of the tune and nothing of the famous vamp. Once the real tune's identity is announced by the piano with the rhythm section, things take off with driving solos by Thielemans and then Hersch as Johnson and Baron wash wave after wave of rhythm against them. The feel changes a few times to hard driving swing as Johnson and Baron walk tightly together, which leads to a truly beautiful and dramatic solo by Johnson.

Thielemans is a world treasure, and if you haven't heard him, this might be the perfect place to start.

Visit Toots Thielemans on the web.