Kai Hoffman: Do It While You Can 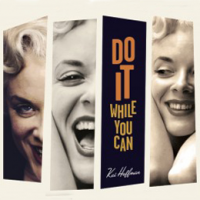 The visual image, the cover design and the positivity of the album title—Do It While You Can—all point in the general direction of a Good Time about to be had. Singer (and French horn player) Kai Hoffman ensures that a good time is exactly what's on offer, crafting a set of songs that makes the most of her personality, her slightly tongue-in-cheek naughtiness and her effortless joie-de-vivre.

Hoffman, an American now resident in the UK, has previously recorded with Ray Gelato's Giants and the well-established Kai's Cats but this is her debut album with her quartet, which she formed in 2012. Hoffman's fellow musicians are top notch—pianist Gunther Kurmayr (Gelato's Giants), double bassist Geoff Gascoyne (Jamie Cullum, Gregory Porter) and drummer Sebastiaan De Krom (Kurt Elling, Cullum) know exactly how to groove and precisely how to bring out the best in a vocalist.

The Giants and the Cats concentrate on swing, Louis Jordan being an obvious reference point: Hoffman's quartet takes a wider view of the scene, drawing American Songbook classics and '70s soft rock into its repertoire. The accent is still very much on upbeat, danceable, songs, though there's also space for ballads and romance.

The rolling, New Orleans opening bars of Fran Landesman and Simon Wallace's "Some Boys" seem to herald a vocal from Dr John, but it's Hoffman who enters, singing one of Landesman's more risqué lyrics with a knowing wink. Alex Gifford's "History Repeating" was originally sung, with the Propellerheads, by diva par excellence Dame Shirley Bassey: the band lays down a driving groove akin to Charles Mingus' "Boogie Stop Shuffle" as Hoffman matches Bassey's punchiness and over-the-top glamor. "Do It While You Can," written by Hoffman and Simon Whiteside, gets added sparkle courtesy of trumpeter Gavin Broom, saxophonist Derek Nash and Hoffman's own French horn.

Hoffman can also deliver a ballad, as she proves on a seductive version of "Pure Imagination" that seems to promise a different kind of pleasure from the one Willy Wonka was offering. Hoffman adds French horn to this song as well, the instrument's soft tone contrasting well with Kurmayr's bright piano flourishes. Jim Croce's "Time In A Bottle" isn't so suited to Hoffman's style—without Croce's own earthy vocal his soft rock hit becomes a little bland, although Gascoyne's bass solo is beautifully judged.

Jazz forgets, all too often, the virtues of the entertaining and the joyful. Hoffman doesn't. Do It While You Can is a joyful 45 minutes, an album on which Hoffman and her band combine swing and soul, set out to entertain, and succeed admirably.

Some Boys; History Repeating; Pure Imagination; Do It While You Can; Long Daddy Green; I've Never Met A Guy Who's Perfect; Make Someone Happy; Sweet Georgia Brown; People Will Say We're In Love; Time In A Bottle; What A Little Moonlight Can Do; The Masquerade Is Over.

Title: Do It While You Can | Year Released: 2013 | Record Label: Broad Reach Records