By DAN BILAWSKY
February 23, 2013
Sign in to view read count 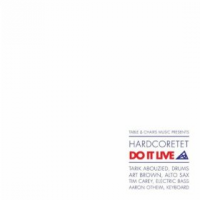 The opening minute of Do It Live seems like a bait-and-switch scenario; with a band name like Hardcoretet, wit and power would seem to be requisite ingredients in the group's work, but only sunshine and rainbows appear at first. Fortunately, these sounds are merely a gateway into the music of this Seattle-based foursome. As this opening track develops, and as this 30-minute session progresses, it becomes clearer and clearer that Hardcoretet is worthy of the winning name it possesses.

Do It Live is the band's second release, following its funky debut, Experiments In Vibe (Self Produced, 2009), and it's only gaining a wider audience now with this year-later re-release. Fusion, funk, rock, jazz and avant-garde ideals all surface at various time, and in various proportions, as the music unfolds, giving the band a wide berth to navigate. Each band member has a distinctive role here: keyboardist Aaron Otheim is the textural force and mad professor behind the music; drummer Tarik Abouzied is the dynamics chief and primary power source; saxophonist Martell Brown is the melodic focal point; and electric bassist Tim Carey is the playful dark heart and rhythmic compass of the band. As individuals they play their parts to perfection, but their strengths are more apparent when viewed as part of the whole.

Periods of relative calm come and go, but the group is at their best when things go a bit haywire. The dark-and-zany "Yeti," which comes off like off-kilter, outré fun house music, and "Urban Tribes," which is high octane, industrial-fusion-jazz for the free-thinking mind, fully embraces the ethos that exists within the word Hardcoretet. Elsewhere, the music skirts around this powerful brand name without ever completely abandoning it. Hardcoretet is tough to pigeonhole, and its music offers a lot to digest, but that seems to be the point.