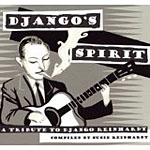 Any tribute to a musician as phenomenal as Django Reinhardt leaves itself open to criticism, so all embracing was the guitar icon's ability to push at the boundaries, still felt to this day. Django's Spirit. A Tribute To Django Reinhardt isn't so much in Reinhardt's spirit as it is an attempt at bringing his work up to date, an exercise which might be considered pointless, given the timeless nature of his music.

While the spirit does, indeed, move through G. Rag Y Los Hermanos Patchekos's "Appel Direct (Appel Indirect)," what emerges first, at least, is merely repertory; but then a guitar solo kicks in which embodies another element of Reinhardt's musical depth—his harmonic liberties.

Dotschy Reinhardt is closer to the source by dint of bloodline. She has one of those effortlessly urbane voices which could soothe the most troubled soul, and whilst her reading of "Girls Like Me / Django's Theme" doesn't really add much to the kind of performance that could have been turned in seventy years ago it's kind of nice to know that the Reinhardt spirit still moves amongst us in that way.

Hoo Doo Girl's "La Recherche de Django Reinhardt" isn't weighted down with reverence, and is right in keeping with the man's spirit. Instead, an amalgam of Gypsy and Garage makes for a pleasing hybrid, with these girls remembering the liberties Reinhardt took as much as anything else; their music's all the better for it.

The Dead Brothers know this too, as their clash of love and irreverence for traditional forms only goes to show. Their "Greek Swing" is a gas, the embodiment of a good night out, but they know enough to realize that the Reinhardt spirit is intoxicating all on its own, so they mine it in infectious good spirit.

Mano Rena's reading of "C Jam Blues" was captured live in a Spanish club called "La Guitarra," and the ambience is there for all to hear, as is her extraordinary guitar playing—which again captures an aspect of Reinhardt's spirit in the harmonic liberties she takes. Her work is nothing short of glorious.

There's nothing so specific about Coco Schumann's "Helmi's Bebop Nr.3" Instead, his work is a tribute to the humanity that flows in all of us. As a survivor of the Nazi concentration camp at Auschwitz, he knows a thing or two about the indomitability of the human spirit and the knowledge infuses his guitar work.