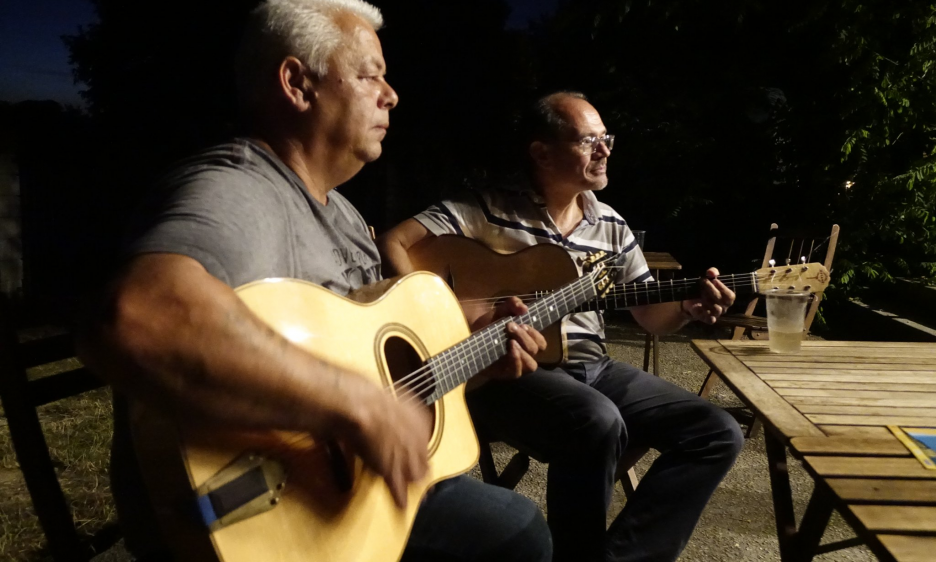 Every year in the grounds of the Chateau de Fontainbleu about 30 miles South of Paris, devotees of jazz gather to hear the Django Festival this year featuring George Benson, renowned gypsy player Bireli Lagrene and a roster of professional bands. Parking lots were full and overflowing. However, Django pilgrims also travelled to nearby Samois-sur-Seine, to the home of Django Reinhardt the high priest of gypsy jazz. A modern day camping city sprang up on the banks of the River Seine, musicians came from across Europe, from South America, Asia, from everywhere. All were dedicated musicians but at the core were the gypsy players.

As a boy, Django was an illiterate, exceptionally talented and dedicated banjo player, travelling across Europe with his musical family in their horse drawn caravan. They were Sinti gypsies descended from travellers from the Sindhi area of India. Disaster struck in their caravan one night when a candle was knocked over igniting highly flammable celluloid with which they made flowers to sell. Django was badly burned, losing the use of the third and fourth fingers of his left-hand which landed him in hospital for months. His brother visited him and gave him a guitar for therapy because it could be played more quietly than banjo in the hospital, and the Django story began. In the South of France he heard American jazz by Louis Armstrong and Duke Ellington, to which he added gypsy music, his own compositions and the playing style caused by his fortuitous disability. So French manouche gypsy jazz was born. His later collaboration with Stephane Grappelli sealed the style into the jazz idiom.

During the early weeks of July, Samois filled with tents, awnings, caravans and motor homes. Under the awnings luthiers repaired and offered for sale the guitars which had taken them many weeks to make. Some musicians laid out tables with snacks and drinks, while others wandered from tent to tent meeting friends and waiting for the invitation to sit in. They played a few tunes then moved on to the next group all day long until their hands cramped. They ate, then played on again, late into the night and through the early morning. There was alcohol involved, things got lively as the fiery players relaxed and enjoyed the revolving jam session. Everyone wanted to play with the best group of the moment which sometimes led to overload, so they took a break and moved on. The guitars were sometimes accompanied by stand up bass or bass guitar, by plaintiff violins, accordions and clarinet but never by drums or brass. The swing skip comes from the pompe, one fast one slow strum of the guitar. Feigeli Prisor and Sasha Strunjas traded guitars to play a spirited "All of me" pictured. They play the melodic original style rather than the faster more modern Parisian evolution of the music. Later, Ezekiel Krief son of Serge Krief played in a corner of the camp, then he was gone. Jam sessions of this magnitude are unruly, not polished performances, however, in among the melee glinted gems of brilliance which sometimes took a day or two to mine, but once found shone out from the rest.

A German player had a 1947 Henri Selmer guitar, the instrument favoured by Django, it was handed around gently with reverence, these instruments are seriously valuable. There was no amplification, groups sat close in circles. It was not difficult to imagine the electric light from generators replaced by candles and firelight. Eventually, the night faltered to an end, but there was always someone, still playing one last tune.