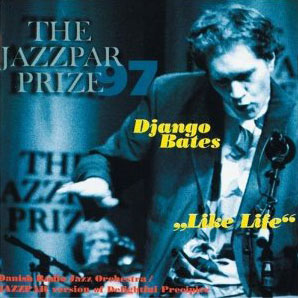 If you had to choose one artifact which is emblematic of the work of the British composer, bandleader and keyboards and e-flat horn player Django Bates, then his notorious "derangement" of John Kander and Fred Ebb's "New York, New York" would be a contender.

It does not matter that "New York, New York" is one of the few tunes in Bates' band book that he did not write himself, excepting the bop anthems on his 2011 tribute to alto saxophonist Charlie Parker, Beloved Bird (Lost Marble). Hearing Bates work his singular magic on a warhorse such as this demonstrates the extent of his genius.

"New York, New York" provides a story, with a happy ending, linking two of Bates' key albums of the 1990s—Winter Truce (And Homes Blaze) (JMT, 1995, reissued on Winter & Winter, 2005) and the 2011-reissued Like Life (Storyville, 1998), the album Bates was funded to make by the Danish JAZZPAR organization on winning the JAZZPAR prize in 1997.

Shortly after Bates recorded Winter Truce, on which he unveiled his makeover of "New York, New York," he performed the tune with his small group, Human Chain, at a music business conference in New York. Winter Truce's original issuing label, JMT, had recently been absorbed into the Verve/Polydor operation, and Bates' treatment of the tune so shocked the assembled executives from his new home, Polygram, that he was dropped from the label almost literally overnight. "It was," Bates recalled in a 2008 interview with All About Jazz, "so totally not what they were into."

In time, being dropped by Polygram proved to be a blessing: Bates took control of his own recordings and achieved artistic freedom. Winning the JAZZPAR prize two years later provided money towards setting up the homegrown operation, as well as a heap of publicity. The prize also included the recording of Like Life, which Bates made with the Danish Radio Jazz Orchestra (DRJO) and a onetime only incarnation of his big band, Delightful Precipice (DP). For the occasion, DP was composed of members of DRJO together with Bates' frequent British collaborators saxophonist Iain Ballamy, bassist Michael Mondesir and drummer Martin France.

Not surprisingly, Bates included "New York, New York" on Like Life, in an exuberant and gloriously disrespectful DP arrangement which would have had the Polygram suits running, screaming, for the doors of their conference venue. 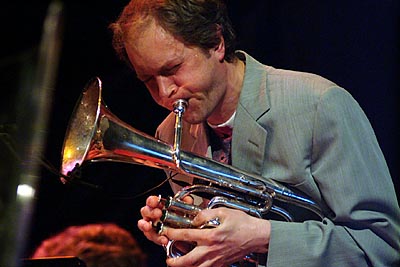 "New York, New York" is one of five DP tracks on Like Life, with the other six performed by DRJO. Human Chain also performed as part of the JAZZPAR award winner's concert, but, for reasons of space, its performance was not included on the album, which was recorded in the studio by the Danish Recording Corporation in March 1997. Bates co-produced with Ole Matthiessen.

Bates wrote three new pieces for the project, the funk-infused "Once A Penguin, Always A Penguin," "The Importance Of Boiling Water" (in which he recites the correct way to make a good cup of tea), and "The Strange Voyage Of Donald Crowhurst," which was prompted by the then-recent story of aspiring round-the-world yachtsman Crowhurst, who faked his "progress" with misleading radio messages (and may have committed suicide when his ruse was discovered).

Recording quality is excellent, if not quite up to level possible a decade, and a digital revolution, later for Spring Is Here (Shall We Dance?) (Lost Marble, 2008), made with the 19-piece StoRMChaser, the post-graduate big band at Denmark's Rhythmic Music Conservatory (RMC), where Bates was appointed Professor of Rhythmic Music in 2005. It is, however, plenty good enough to catch most of the detail in Bates' typically big and dense orchestral arrangements. The tunes themselves are corkers, and include several of Bates' classics of the 1990s. And the playing throughout is top drawer, with saxophonists Ballamy, Tomas Franck and Uffe Markussen, guitarist Anders Chico Lindvall and Bates, on keyboards and e-flat horn, excelling themselves.

Tracks: Tightrope; Once A Penguin, Always A Penguin; The Loneliness Of Being Right; Like Life; New York New York; Misplaced Swans; The Strange Voyage Of Donald Crowhurst; The Importance Of Boiling Water; Peculiar Terms Of Physical Intimacy; Armchair March; Nights At The Circus.