Django Bates: From Zero to Sixty in Five Days 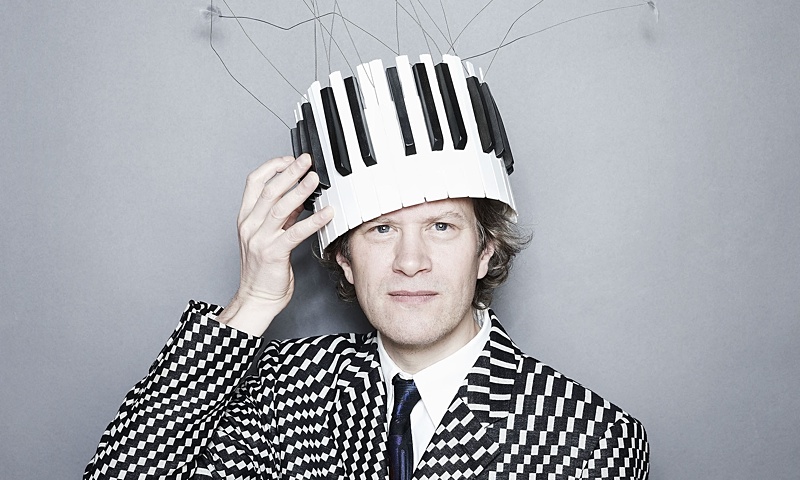 Then I thought, 'Maybe it's me; maybe it's because I've been working with the Beloved Trio playing this Parker music; maybe it's that I've been invited to a meeting in Luleå, and that was a big commitment.' So I thought, 'Why not. Why NOT?' &#151Django Bates

It's rare enough to get to catch the premiere of a brand new work in a location as removed as Luleå, Sweden—just 100 kilometers south of the Arctic circle and in late May already experiencing 22-hour days and temperatures between 20 and 25 Celsius. But to get to experience the birth of a commission and to arrive on the same day as the artist and enter the rehearsal room at the same time? An unexpected pleasure. The chance to follow an artist and a group of musicians (many of whom were meeting each other for the very first time) through a series of rehearsals for a new book of music (during which the music sometimes was broken down into the nittiest of gritties) and, five days later, the delivery of a cohesive and compelling performance that sounded as though they'd been playing it for years? Nothing short of illuminating and inspiring.

It was especially so when the artist in question was renegade British pianist/horn player/composer Django Bates. Since first gaining national and international attention through his work—both with Britain's legendary large ensemble Loose Tubes and, concurrently, as a member of Bill Bruford's first incarnation of the Earthworks band (which increasingly occupied the progressive/art-rock drummer-turned-jazzer's attention through to his retirement from public performance in 2009) Bates has gone on to become a hugely respected and influential artist in his own right, winning awards including Denmark's renowned Jazzpar prize in 1997.

With a discography that includes a trilogy of cryptically titled and musically challenging sets on then JMT, now Winter&Winter (1993's Summer Fruits (and Unrest), 1994's Autumn Fires (and Green Shoots) and 1995's Winter Truce (and Homes Blaze)), as well as band-member appearances on notable recordings such as Norwegian singer Sidsel Endresen's two stellar ECM recordings (1990's So I Write and 1993's Exile), Bates has earned a reputation as a composer for large and small ensembles and as a performer who brings no shortage of wit, wisdom and warmth to any project with which he's associated. This reputation has continued to build over the course of two decades and has led to important educational positions for Bates. A now-completed five-year run in Copenhagen also saw the emergence of his StoRMChaser band, whose recorded debut, Spring is Here (Shall We Dance?) (Lost Marble Recordings, 2008), finally completed his "Four Seasons" series in impressive style, albeit after a 13-year gap.

Bates has recently secured what appears to be an open-ended professorship in Bern, Switzerland that seems tailor made for a musician who needs time to tour and, most importantly, to think—a luxury increasingly less afforded to contemporary jazz musicians who now spend more time traveling to gigs than performing in them, and who normally hve to stretch themselves in order to make ends meet. It's also the kind of position that allows Bates the freedom to accept what was clearly a unique challenge: to take the music played by his current Beloved Trio and, with a newly commissioned piece also part of the project, collaborate with northern Sweden's world-famous Norrbotten Big Band, a fluid large ensemble that's garnered significant international attention for albums such as Worth the Wait (Fuzzy Music, 2008) and The Avatar Sessions (Fuzzy Music, 2010)—the latter recorded in New York's legendary Avatar Studio and featuring the music of trumpeter Tim Hagans, who was the big band's Artistic Director and Composer-in- Residence from 1996-2010. 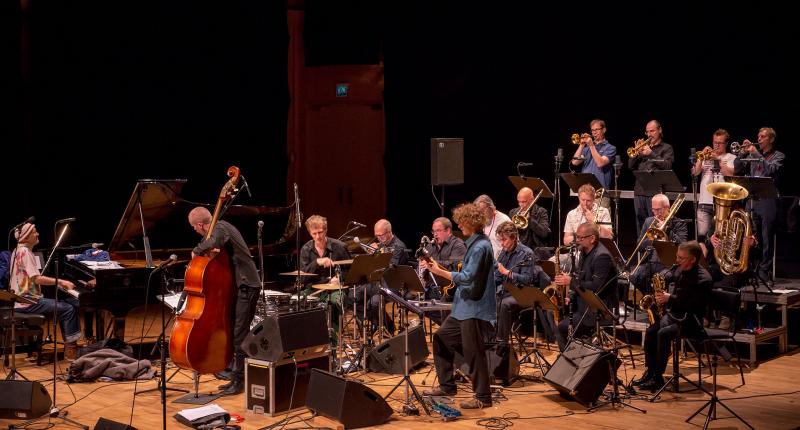 Bates' current trio represents a number of firsts for the pianist. Named after its debut recording, 2011's Beloved Bird (Lost Marble), the trio represents the first time in the pianist's career that he's worked regularly in a conventional piano-trio format—although with Bates involved, the only real given is that the word "conventional" belongs in no sentence also sporting the pianist's name. While the group's raison d'être has been to celebrate the music of bebop progenitor saxophonist Charlie Parker, its two recordings to date- -including its most recent, Confirmation (Lost Marble, 2013)—reflect a group whose irreverence for the music is as deep as its respect.

The trio actually played completely free for its first year, before any written music was introduced. Swedish-born bassist Petter Eldh recalls, "I met Django for the first time in Trondheim [Norway], where I was part of a one-week project. I was a student at that time, and there were students from different high schools and music conservatories from around the Nordic countries. So we went to Trondheim and played some of Django's music in a big-band setting for the whole week. That was seven years ago and was my first introduction to playing his music."

Danish-born drummer Peter Bruun's introduction was similar, but dates further back: "I was studying at the Copenhagen Conservatory and, in my first year ('98), Django had a workshop there but I didn't see Django after that workshop until he started his professorship at the Conservatory around 2005 or '06. By that time, Petter was studying at the Conservatory and Django was in charge of selecting different teachers to lead these one-week combos. I was invited as a teacher to play some of my music and to improvise a little bit, and Django made sure that Petter was in my combo. I don't know if he made sure that the drummer in the combo was really, really stoned and was only there for the first two days and then felt a little bit low in energy; I don't know if he was paid to do that [laughs]. But anyway, we got to playing a little bit and that was the first time we worked together. And then there's Django's version of the story—well, one of the stories—that he was outside the door listening." 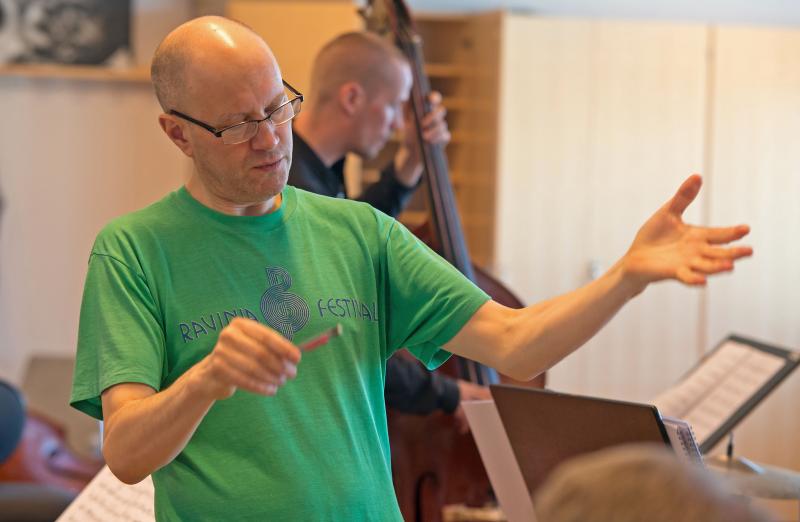 Bates picks up the story: "It was a really happy coincidence. Normally, you have an idea for a band that comes from a musical concept, and you turn up to the first rehearsal with something. There's the story of Sonny Rollins showing up to record the music for the film Alfie with one scrap of paper with a tune that goes: [sings theme]. The line itself is incredibly repetitive, and then you repeat that repetitive line. That's brave; that's real courage.

Eldh interjects, "We would play free and then have a massive hang afterwards, so that was the routine—no, not a routine, a ritual."

"I think that's part of the reason that we very quickly decided to memorize all the music [for the Norrbotten project]," concludes Bruun, "because the energy and that feeling that we have— we wanted to add naturally to the complexity of Django's written music, combining it and making it a little shady ... even stretching the time. That's a lot easier when you don't have to follow a written timeline."

"So then, when after at least a year, a gig accidentally came along, I was called and asked if I wanted to be part of the celebration of Charlie Parker's life at the Jazzhouse in Copenhagen," Bates continues, returning to the story, "and I thought, 'Yeah, this is time to get more specific with the trio.' So I did some arrangements, took them in, and everything we did in our free playing made it so bloody easy to play the music together."

"We have one element in the trio that's always an option, and that is to just break free from anything written at any time," adds Bruun. "There's always this option of coming back, and it's so easy to come back because we just need two notes, and then we know: OK, we're back on track. That's something that we have a harder time doing with the big band."

This is no real surprise, as Beloved Trio's two recordings not only take Parker tunes such as "Confirmation" and give them plenty of rhythmic twists and turns, and accelerations and decelerations, but also introduce Bates' original compositions: writing that makes total sense side by side with his sometimes knotty, sometimes more straightforward Parker arrangements. Confirmation even includes a Burt Bacharach/Hal David song, "A House is Not a Home," sung by ex-Loose Tubes mate, trombonist Ashley Slater, and it also magically fits in as if it were written specifically for the project. 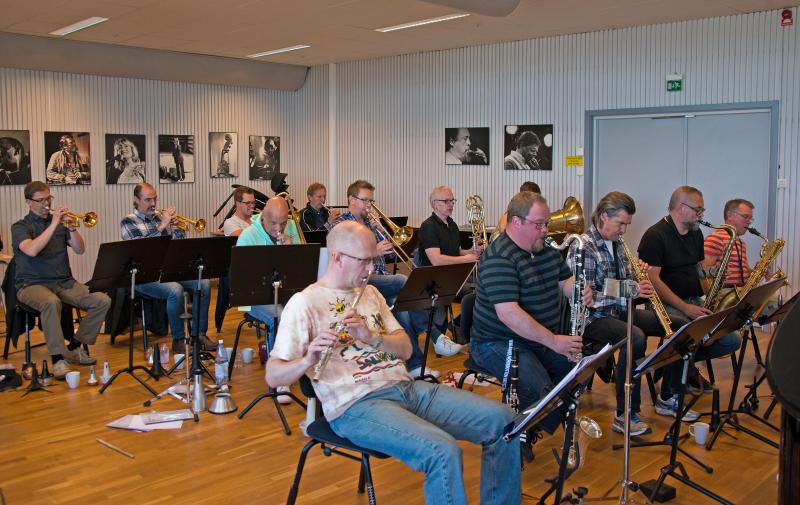 How this commission came to be—as a part of Luleå's New Directions Festival, a first-time event that was more predicated on contemporary classical music but also included improvised music from artists like Bates and Greek singer Savina Yannatou—is a story in itself. Bates explains, "I've had a few big bands in my life, and I've been in a few after Loose Tubes, when I came to start my own thing. I deliberately removed some of the brass, so I went for a more orchestral, lighter sound with a bit more textural possibilities. So I had a French horn and only two trumpets, trombone, bass trombone, tuba and flute—a more orchestral concept.

"I built up this big library of music for StoRMChaser, and what happened, as a result of that, is I would receive invitations to meetings where they'd say, 'We have a big band, we have musicians on salary, and we'd like to do a project.' They'd talk about my music and what the lineup is, and the conversation would always end up with, 'Oh well, maybe not this time then; we'll speak again.' I don't think any of these bands managed to believe that I was so crazy as to turn down these opportunities time after time [laughs]. 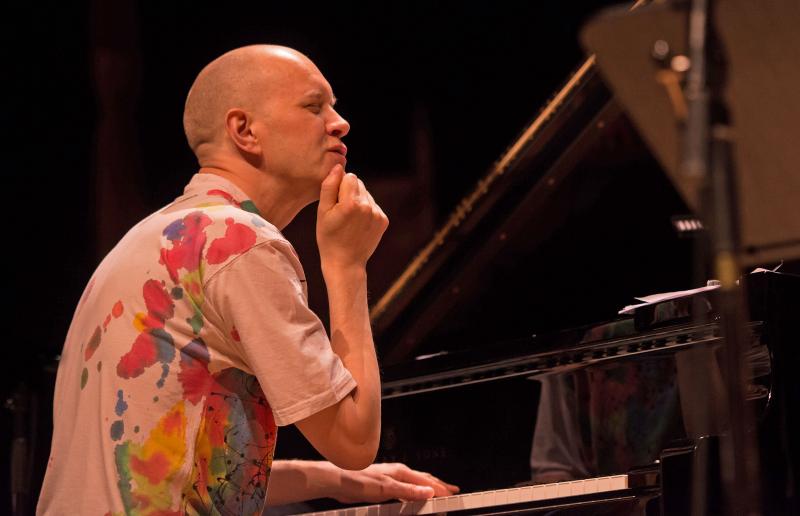 "One of the reasons I did it was that I deliberately wanted to avoid writing for the traditional big-band lineup, so it kind of suited me that these projects never came off. Occasionally a band would say, 'Yeah, OK, we can get the extra French horn, and we can find the piccolo and a flute,' so it did happen every once in a while, where the StoRMChaser music would be played by another band.

"So, many times that's what happened. But when I came out here for meeting, it was two flights, so there was already a commitment for a meeting, but I already had the conversation in my mind that it was going to go the way it always does. So we had the conversation, and I said, 'Yeah, I've got this music, and it's blah, blah, blah. It requires a singer.' And they went, 'Yeah, but it doesn't really work'—the usual conversation.